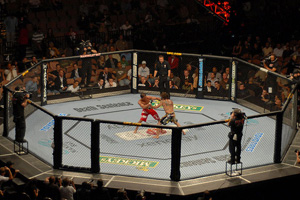 The evangelical mixed martial arts fighters tribute the sport to Jesus’ willingness to never give up. They say, "Jesus didn't tap," meaning he did not give in until he could no longer continue, meaning crucifixion.

As Tim Tebow garners media coverage because of his Christian beliefs, some may question how Christianity can be entwined in such a game of violence as football.

But that pales in comparison to one group of evangelical Christians who are willing to beat each other up cage-match style in the name of their Lord and Savior.

That behavior piqued the curiosity of Melissa Galica, a Texas Tech graduate student in the Department of Sociology, Anthropology and Social Work, who studied the group and described them in her work “Let’s Get Ready to Humble: The Use of Recreational Violence as a Religious Recruitment Tool.”

Galica, a sociology student, recently presented her work to the Association for the Sociology of Religion.

“Years ago, I had read about using Brazilian Jiu-Jitsu as an evangelical tool to recruit men,” she said. “A lot of times, evangelical Christianity is considered feminine. You know, ‘Let’s hug it out.’ This is literally talking about beating the crap out of someone. I’m talking knock-down, drag-out, bloody nose.  This is cage fighting, but in a Christian context. You can go on any Christian mixed martial arts website and the participants say ‘We’re doing this for God. We’re Christian warriors.’ Then, they go into a cage and beat each other. And then you think, ‘Uh, wait a minute.’”

Because many Christians talk about kindness, neighborly love and turning the other cheek, the evangelical Christian mixed martial arts approach to praise can cause dissonance with several main messages of Jesus to the casual onlooker.

However, Galica said that the fighting often is a tribute to Jesus’ willingness to never give up on humans and continue fighting the good fight, sparking the catch phrase “Jesus didn’t tap” within this group of believers.

Though little material exists about the exact beginnings of such groups, Galica said they originated on the East and West Coasts in the mid-1990s, and have grown ever since. Many of the followers come from inner-city surroundings and claim to have been down-and-out before finding the mixed martial arts Christian groups, saying the experience changed their life.

About 150 listed Christian fighting organizations exist in the U.S., she said, spread all over the country, concentrating on the West Coast especially.

“These groups say to these types of men, ‘We’ll let you be masculine and fight each other, but we still want you to have Christian values,’” she said. “I think a lot of times young men think, ‘I don’t want to hug this out. You don’t live on the streets.’ Well, now, you’re starting to see youth pastors with tattoo sleeves and piercings. And now this.”

After the Association for the Society of Religion issued the theme of violence and religion as one topic they’d like researchers to study two and a half years ago, Galica said she took the less-obvious approach of looking at violence and terrorism to delve into these relatively recent Christian fight groups.

“After I read about this movement, I wondered if anyone in the academic religious community is doing anything on this. Did this raise questions about what’s going on here? Can you really have people bloodying each other and still say, ‘Well, you need to treat everyone with respect and treat them nice and turn the other cheek?’ This gave me the opportunity to break out and see where it went.”

A more masculine approach to Christianity is hardly something new, Galica said.

In the mid 1800s, the work of Charles Kingley and Thomas Hugh sparked the Christian muscularity movement, followed by the YMCA movement, where men were encouraged to engage in sports to build their bodies – their temples – into better images to not only do the Lord’s work, but also make themselves into better men. 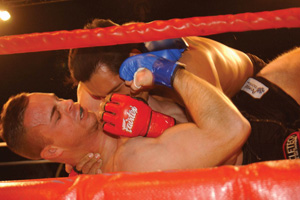 This sport and other modern Christian movements are encouraging men to believe in Christ but exhibit masculine traits, which include physical activity.

Another more modern movement include Promise Keepers, which encourages men to believe in Christ but exhibit masculine traits such as acting as the head of household, focusing on physical activity and serving as the foundational support for the traditional nuclear family.

Paul Johnson, a professor of sociology who served as Galica’s advisor during her research, said that religion is sometimes related to various forms of violence as an aspect of male competitiveness and aggression.

He said part of the attraction to this kind of attraction may be the sense of euphoria participants experience when exerting themselves in an aggressive manner, particularly if they win in a competitive contest involving physical aggression.

“I know from other work that there are people interested in Christian athletes, and of course Tim Tebow – well, this is part of that same genre,” Johnson said. “I see that interest as a reflection of research a few people have done in the sociology of religion linking highly masculine behavior as a way to express their religious beliefs.  They rationalize their behavior as having a higher purpose than self-aggrandizement. Or they’re using aggressive competitive activities to demonstrate that religion is not a feminine pursuit or oriented toward getting people to adapt passively to the way things are.”

“I know there’s a real cognitive dissonance about that kind of violence in these fighting groups and what evangelicals are trying to preach about turning the other cheek and making our own village against the world,” she said. “You read some of the negative comments from evangelicals on the Christian fight club websites, and it’s bad. But that, in turn, really strengthens this group.

It seems to strengthen their cause when they find pushback from their own religious subgroup. The biggest cohesion factor is when other evangelicals say ‘you’re wrong.’ A lot of them go into very eloquent soliloquies about fighting for Christ. Jesus didn’t tap. A lot of these guys get into these fights until they physically can’t do it anymore because they believe Jesus didn’t tap. He never gave up.”