Texas Tech becomes just the second school to ever successfully defend its championship. 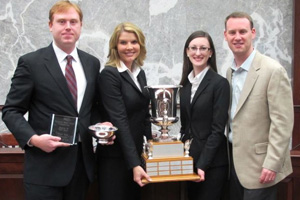 Brandon Beck, Allie Hallmark and Elizabeth Hill defeated the University of California-Berkeley School of Law in the final round. They are coached by Rob Sherwin (far right).

The team of third-year law students Brandon Beck of Austin, Allie Hallmark of Midland and Elizabeth Hill of Lubbock prevailed over the University of California-Berkeley School of Law in the final round. With the repeat win, Texas Tech becomes just the second school to ever successfully defend its championship. To complete the night, the team’s brief was named top in the nation, and Hallmark was named the nation’s second-best advocate.

The team is coached by Rob Sherwin, director of advocacy programs.

“Needless to say, I’m so pleased with our amazing students, who continue to make Texas Tech proud. Perhaps the fact I’m most proud of is that we've had top finishes in not just one, but three different disciplines of advocacy competitions already this year,” Sherwin said. “When added to our second-place finish at the Liberty National Negotiation Competition last week and our national championship at the ABA Arbitration Competition two weeks ago, this win signals success across a wide range of lawyering skills.”

Dean Darby Dickerson, who attended part of the NYC competition, said that the team was probably the strongest she’s seen in 17 years of moot court competitions.  “The students were prepared, poised and professional. They represent a bright future for the legal profession and were outstanding ambassadors for Tech Law and our advocacy programs.”

Nearly 190 teams competed in 15 regionals in November, and the top 30 teams met in Manhattan for the national finals. The championship round panel included two federal circuit court judges, two federal district court judges, one New York state court of appeals judge, and the presidents of the ACTL and NYC Bar.