That was the message from Tibor P. Nagy, vice provost and former ambassador, at lecture series. 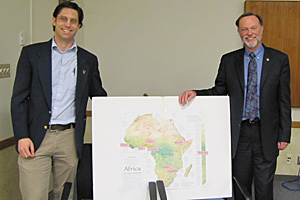 Tibor P. Nagy, vice provost for international affairs at Texas Tech and former ambassador to Ethiopia, said African policy has always been one of the lowest priorities in the U.S. Department of State’s foreign policy, resulting in low funding, small staffs and a lack of centralized control within the region.

Of the 10 fastest growing countries in the world, seven of them are in the African continent, and 11 African economies are worth more than 13 trillion, he said. So what can the U.S. do to help integrate Africa into the 21st century? Nagy provided the following solutions:

“The U.S. has always viewed Africa as a problem since day one, rather than an opportunity,” said Nagy, who spoke about American Policy in Africa on Feb. 6, as part of the Africa Symposium lecture series.

“There is an old African proverb that says ‘even the darkest night is followed by a bright dawn.’ The U.S. can be the one to bring Africa into the daylight.”

Nagy said the African policy has never been coherent, and no over-arching policy framework has ever been successfully implemented to unify the continent. For 50 years, Africa has been developing and none of the countries have reached developed status.

He said the issues affecting the African continent have always tended to be more complicated as compared to the issues in Europe or Asia. Thus, the approach toward African policy has differed throughout presidential leaderships since the early 1950s.

Initially, he said, the U.S. Department of State created a policy geared toward dealing with the newly independent African states; addressing economic development within the region, and imposing western intervention to combat soviet communist influences in the African states.

During the 1970s, Nagy said, countries such as Ethiopia and Angola came under the control of a Marxist government, resulting in a greater U.S. involvement within the region.

However, he said, with the fall of communism in Russia, the U.S. department’s African policy and intervention was downgraded to a low priority issue.

“As the U.S. took a step back,” he said, “many African countries experienced immense political turmoil through single party states, sham elections, massive corruption and the advancement of political principles rather than economic ones.”

Despite the massive failures in Rwanda and Somalia, he said, the U.S. has enjoyed temporary success in countries such as Mozambique and South Africa.

“We have had tremendous success through our phenomenal humanitarian efforts throughout the region and HIV awareness program,” he said.

However, Nagy said, problems still persist throughout the continent such as the continuing violence in the Democratic Republic of Congo, and the abandonment of Somalia, the only country in the world without central governmental control over most of the country’s territory.

“I still remain optimistic for the future of the African continent,” he said.