Ten award-winning films will show at the College of Mass Communications during March, April and May. 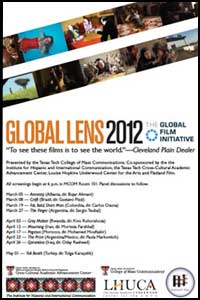 The Global Film Initiative announced today that the Global Lens 2012 film series is set to screen at the College of Mass Communications at Texas Tech during the months of March, April and May.

The ten award-winning narrative films headlining the series are from Albania, Argentina, Brazil, Colombia, Iran, Iraq, Morocco, Rwanda and Turkey. The College of Mass Communications is located on the Texas Tech campus at the northwest corner of Memorial Circle, on the corner of Boston and Broadway. Admission is free.

“The lineup this year is really going to surprise audiences,” said Susan Weeks Coulter, board chair of the Global Film Initiative. “The cinematic are strong, the tone is fresh and the stories are thought-provoking and unlike anything we’ve seen before.”

All screenings will begin at 6 p.m. and take place in room 101 at the College of Mass Communications. A panel of interdisciplinary scholars from the Texas Tech faculty will follow each screening and will encourage discussion and remarks from the audience.

The Schedule of Events is as follows:

Global Lens in an annual, touring film series launched in 2003 by the Global Film Initiative to support the distribution of critically acclaimed cinematic works from around the world. Since its founding, the series has provided a platform for exceptional storytelling and opened a window into the diverse world in which we live.

This year marks the fourth year the series will play at the College of Mass Communications. The series is made possible by generous contributions from the Institute for Hispanic and International Communication, the Texas Tech Cross-Cultural Academic Advancement Center and Louise Hopkins Underwood Center for the Arts and Flatland Film.

The Global Film Initiative is a U.S.-based international arts organization specializing in the support of independent film from Africa, Asia, Central & Eastern Europe, Latin America and the Middle East. Founded in 2002 to promote cross-cultural understanding through the language of cinema, the Initiative awards numerous grants to deserving filmmakers from around the world each year, and supports a touring film series entitled Global Lens.

Feed Your Body and Soul Week to Raise Awareness