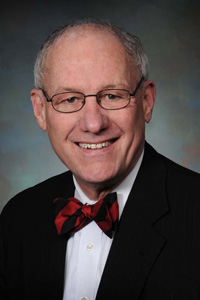 Huffaker takes pride in his work as a former member of the TTUS Board of Regents, but looks forward to his future contributions to the university through his new role.

Officials at the Texas Tech University System (TTUS) announced Wednesday (Feb. 1) the hiring of John Huffaker, former member of the TTUS Board of Regents, as vice chancellor and general counsel. He will begin duties Feb. 13.

Huffaker will provide legal counsel to TTUS and its component institutions, coordinate institutional compliance and oversee legal teams at each university.

“It has been a pleasure serving the Texas Tech University System as a member of the board for the last three years,” Huffaker said. “Texas Tech has always meant a great deal to me, and I look forward to contributing in this new role.”

“John is an outstanding attorney,” said Kent Hance, TTUS chancellor. “We were fortunate to have him serve as a regent and are excited to have such a distinguished and experienced leader join our organization.”

Prior to joining the system, Huffaker was an attorney and a shareholder in the Amarillo law firm of Sprouse Shrader Smith, P.C. His practice areas include agricultural law, bankruptcy, banking, commercial litigation and employment law. He is also board-certified in civil trial law.

Huffaker earned his bachelor’s degree in agriculture from Texas Tech in 1970 and law degree from the Texas Tech’s School of Law in 1974. In law school, Huffaker served as editor-in-chief of the Texas Tech Law Review.  He is married to Charlotte Warren Huffaker, a 1970 graduate of Texas Tech’s College of Human Sciences.

Huffaker will replace Pat Campbell, who will stay on to assist Huffaker through a transition period ending March 31, following a 30-year career with TTUS and Texas Tech.

“The Texas Tech University System thanks Pat for his many years of dedicated service to our system and universities,” Hance said. “His insight and expertise made Pat an invaluable member of our team, and we wish Pat the best.”

“Texas Tech has made a great impact on my life and I am proud to have worked here,” Campbell said. “It has been an honor to work for the place that has given me so much.”