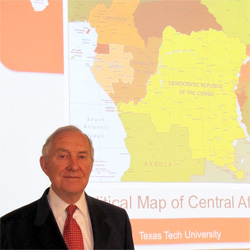 Bob Krueger on his time as the U.S. Ambassador to Burundi: "It was certainly the richest experience of my life."

Former U.S. Sen. Bob Krueger said he could only think about two things when genocide continued to rage during his term as U.S. Ambassador to Burundi: saving democracy and saving lives.

Krueger spoke to a room full of faculty and students Thursday to conclude the Texas Tech Department of History’s weeklong event, titled Conditions for War, Conditions for Peace: A Symposium on Africa.

“I’d never had anything so clear in all my life,” Krueger said “Nothing else really mattered.”

After losing his Senate race by less than half a percent, Krueger met with Former President and friend Jimmy Carter about possible job opportunities in foreign affairs. He soon was offered several positions, one which led to his eventual placement in Burundi.

Following the call about Burundi on his oldest daughter’s fifth birthday, Krueger said he had to run to the map to make sure he knew where the small country of 7 million people was located.

When he accepted the position, Burundi had recently held its first free election.

“It and Rwanda are extraordinarily beautiful countries,” Krueger said. “Nature’s gifts are everywhere. I thought ‘Great! I get to go to the world’s newest democracy.’”

However, only weeks into his position, he began hearing reports of mass killings in the countryside and later witnessing the noise of nightly grenades himself.

In a country made up of two distinct ethic groups, 15 percent Tutsis and 85 percent Hutus, despite the influence of western Belgium, the Tutsis remained in the long-standing power. This was evident in every aspect of daily life.

“They received 90 percent of the positions in secondary school, better than 90 percent of the positions in university, and all the judgeships and all of the army, and all of the people with firearms. They had had this for a very long period of time,” Krueger said. “Then what happened is that on the 101st day in office, the military came on to the grounds, took the new Hutu president away and beaneted him to death.”

Krueger estimated there were about 100 deaths a day in Burundi, stating that would be proportionally equivalent to 4,200 U.S. deaths a day, more than were lost in the 9/11 attacks.

In order to find out the truth about the rumored killings, Krueger ventured out into the countryside where he found pits filled with victims of mass killings and decaying bodies.

“I’ll never forget that sticking up, out of the ground like this, was the leg of one of the bodies that they hadn’t buried quite well enough.” Krueger said as he formed a firm and tilted fist. “There is no scent so sickening, so repelling than decaying human flesh. There was no real civilian power. It was all military estate.”

“I just thought, I represent the most powerful country in the history of the world,” Krueger said. “If I don’t speak out, who’s to speak?”

During the news conference Krueger called for, he showed pictures of the nearly 70 bodies his team had found in one village, sharing dialogue from natives and photographs.

Within a week, Krueger recounted two newspapers calling for his assassination. Eventually, it became dangerous enough that the U.S. required him and his family to leave Burundi.

While in Burundi, Krueger not only helped expose the injustice going on in the country, but assisted Burundi citizen and refugees from Rwanda in leaving the country.

“It was certainly the richest experience of my life,” Krueger said. “I went back 13 years later, and to my astonishment, in a country where the median age is 16, when they found that Ambassador Krueger was back, they started cheering in the streets.”