Alice Young was recently named a Fellow of the American College of Neuropsychopharmacology. 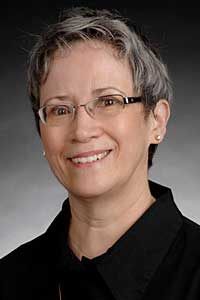 Becoming a Fellow is in recognition of Dr. Young's continued scientific contributions in drug tolerance and dependence processes, as well as learning and memory disorders.

Alice Young, associate vice president for research (research integrity), recently was named a Fellow of the American College of Neuropsychopharmacology (ACNP) at the organization’s annual meeting.

The designation is awarded to individuals who have made substantial contributions to the field of neuropsychopharmacology and to the organization.

“This is a special honor,” said Young. “I’m especially thankful for the work ACNP does to encourage interactions among basic and clinical scientists.”

ACNP, founded in 1961, is a professional organization of more than 950 leading scientists, including four Nobel Prize laureates. Its mission is to further research and education in neuropsychopharmacology and related fields. It is considered to be the premier organization in the world devoted to advancing the neurobiology and treatment of psychiatric disorders.

“Dr. Young was accepted as a member of the College in 1997, a testament to her significant research contributions to this field,” said Ronnie Wilkins, ACNP executive director. “Becoming a Fellow is in recognition of her service to the organization as well as her continued scientific contributions in drug tolerance and dependence processes, and learning and memory disorders in Alzheimer’s disease.”

In her role as associate vice president for research, Young works with all Texas Tech research compliance offices and with the Texas Tech Ethics Center to develop the university’s Responsible Conduct of Research training programs.

“This is a real honor for Dr. Young and reflects the standing and the regard with which she is held by her peers,” said Taylor Eighmy, vice president for research at Texas Tech. “We hope that Dr. Young greatly enjoys her continued collaborations with her colleagues and scientists in her field. This appointment is very special and a tribute to her.”

Before joining Texas Tech in 2004, Young was professor of psychology, and of psychiatry and behavioral neurosciences at Wayne State University, where she also served as associate dean for research and graduate programs in the College of Science. She is a former recipient of a National Institute on Drug Abuse Research Scientist Development Award. Her research and teaching focus is on behavioral pharmacology and applied cognitive psychology.