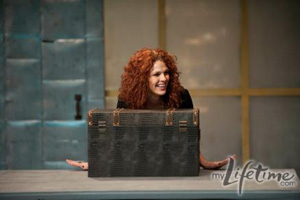 Contestants on "24 Hour Catwalk" are unaware of the material they will be using until they open their trunks.

A Texas Tech College of Human Sciences alumna has won the approval of some of the nation’s most renowned in the fashion industry, not to mention $10,000.

Ashley Burghardt, a 2008 apparel design and manufacturing (ADM) graduate, was recently featured on Lifetime Television’s “24 Hour Catwalk,” a show that challenges designers to create their own collection in just 24 hours.

The Red Raider appeared in the Feb. 16 episode titled “Sex Appeal,” opposite three other designers, including a 61-year-old New Yorker trying to prove she was still relevant to the industry; a self-proclaimed king-of-fashion, also from New York, and a naïve Southern gentleman.

In the initial two-hour elimination round, Burghardt and the others were challenged to make a “sexy first-date look” out of a pair of “granny panties.” Each was required to incorporate the panties, sew at least part of the garment, and present the design on a dress form.

A former designer at both Be&D and Coach, Burghardt now owns Dallas-based handbag line, Ashard Richely, a combination of her and her husband’s first names. With a specialty in accessories, she said she went into the competition feeling like the underdog.

“I haven’t sewn a garment in five years,” she told the cameras. “Everyone else has a lot more experience.”

Burghardt’s lingerie-themed dress included a very short skirt and exposed boning. The panties were incorporated into the waistband, with the lace inserted at the bust line. 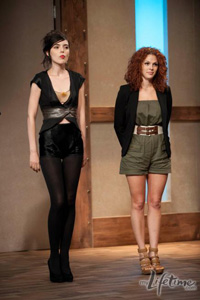 Ashley Burghardt, right, stands next to a model wearing one of the designs she created during the competition.

The judges, designer Cynthia Rowley, author and fashion editor Derek Blasberg and publicist James LaForce, selected the Red Raider to advance to the final competition, where she had to fashion a fluffy pink negligee into an “inner wear as outerwear” collection, carefully walking the fine line between sexy and scandalous.

The requirements included sketching three designs, utilizing the negligee in at least one of them. All six designs were to be presented by live models on the catwalk, fully sewn. And each designer also managed a team of three sewers, tasked with helping them complete the collection within an intense 24-hour span.

Su-Jeong Shin, director of the Texas Tech ADM program, expressed great confidence in her student, despite the time constraint.

“Ashley was a talented student and successfully completed any project on time with full execution of the design process,” Shin said. “She has great passion.”

“I don’t know how much experience Barrett had with the ladies,” she said. “So I thought I might have the advantage.”

Burghardt’s designs “The Mistress,” “The Temptress,” and “The Missus” consisted of sophisticated looks in all-black, celebrating women of power.

“ADM faculty and students are so proud of her,” Shin said. “And Ashley’s story will inspire others design students to pursue their own dreams.”

View the show’s outcome and the results of Burghardt’s hard work here.