Alumna Gets Opportunity of a Lifetime on Reality Show 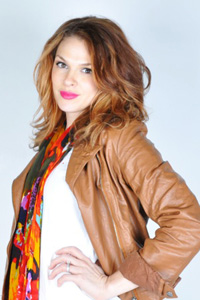 A Texas Tech College of Human Sciences alumna will compete for $10,000 and approval from some of the nation’s most renowned fashion personnel on Lifetime Television’s reality show “24 Hour Catwalk.”

Ashley Burghardt, a 2008 apparel design and manufacturing graduate, will compete as one of the four designers at 9 p.m. CST on Feb. 16. Each week, producers select four promising designers. After an initial elimination, the judges, designer Cynthia Rowley, author and fashion editor Derek Blasberg and publicist James LaForce, select two contestants to design an entire collection in an intensive 24-hour span.

While “24 Hour Catwalk” does provide contestants with a team, they must be well-versed in the skills required to create a collection themselves.

“I started sewing at 6 years old,” Burghardt said. “I knew how to sew before coming to Texas Tech, but I didn’t know how to make my own patterns and draping. Rachel Anderson taught me draping, and she’s an amazing teacher. Everything I learned about draping I learned from her.”

Rachel Anderson, instructor in the department of apparel design and manufacturing, said Burghardt was a joy to have in class and an excellent student.

“Her creativity and enthusiasm were both contagious and inspirational,” Anderson said.

During the New York filming, Burghardt said she and the other contestants didn’t sleep for two days straight. While the designer loves her current work in accessories, she said she would like the opportunity to get back into clothing, the material responsible for her love of the industry in the first place.

Burghardt’s Dallas-based handbag line, Ashard Richely, a combination of her and her husband’s first names, was inspired by a semester trip attending Texas Tech enabled her to take.

“While I was at Texas Tech, I studied abroad in Florence, Italy, for accessories and fell in love with it,” Burghardt said. “I now have two lines, a leather line, Ashard Richley, and a synthetic, AR by Ashard Richley.”

Handbags range from $40-$500, reaching a diverse group of individuals. Prior to the inception of her own line, Burghardt worked as a designer at both Be&D and Coach.

To view the show’s outcome and the results of Burghardt’s hard work, tune into Lifetime Television on Feb. 16.