The $144,000 grant will fund the digitization of the Families of Vietnamese Political Prisoners Association Collection. 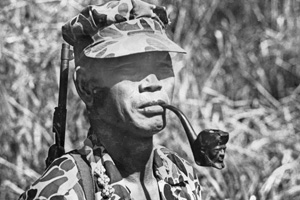 Over a period of three years, students will digitize files regarding Vietnamese individuals who were applying to immigrate to the U.S. after the war.

For patrons of Texas Tech’s Vietnam Center and Archive, researching the historic immigration experience of Vietnamese Americans will soon go electronic as a result of a recent grant allowing the center to digitize one of its collections.

Over a period of three years, students will digitize files regarding Vietnamese individuals who were applying to immigrate to the U.S. after the war. As it is digitized, the entire collection will be added to the center’s Virtual Vietnam Archives.

Mary Saffell, associate director for the Vietnam Center and Archives, said while thousands of volumes exist about the Vietnam War itself, relatively little has been studied about the Vietnamese immigration experience. Digitizing these records on one of the largest immigrant groups in the nation provides historians and other scholars a comprehensive resource that can provide insights into Vietnamese American immigration.

“Coming from a war-torn nation and fleeing a communist regime, Vietnamese Americans have a unique and tumultuous history,” Saffell said. “The FVVPPA collection is as important to the study of Vietnamese Americans as the Ellis Island records are to the families of immigrants from the early 20th century.”

This will be the second grant the Vietnam Center and Archive has received from NHPRC for the FVVPPA records. In 2010, the center received a grant to initially process the collection.