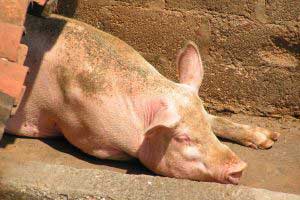 More than 400,000 pigs have a negative experience, therefore the research focused on defining transport bedding requirements during all weather conditions.

Researchers at Texas Tech and Iowa State University found that the pork industry can generally use less bedding year-round than it currently does when transporting swine.

The change could improve overall animal well-being and could save the industry an estimated $10.1 million per year. The study was funded by the Pork Checkoff.

For about 4 percent of the 100 million pigs transported annually to butchering day, the efficiency of U.S. meatpackers and swine processors goes haywire. But something as simple as adequate bedding matched to the weather goes a long way in improving animal survival, said John McGlone, a professor in Texas Tech’s Department of Animal and Food Science.

Depending on transport conditions, swine can overheat, experience unneeded stress, or even death, McGlone said. High stress levels can increase lactic acid buildup in the muscles of the pig, which causes the meat from the animal to be dry and pale. This, along with an increased death rate, can result in more losses for all parties, he said.

“More than 400,000 pigs have a negative experience,” McGlone said. “It’s one reason why we focused on defining transport bedding requirements for pigs in commercial settings during three separate conditions: cold, mild and warm weather.”

Truckers already have some firm guidelines based on transport quality assurance regulations. Among the rules are clean, approved bedding and extra bedding during winter months. The bedding can range from wood shavings to wheat straw or even corn stubble. According to McGlone, the current standard in the industry is to use four bales of bedding per semi-trailer.

During the course of a year, McGlone and his research team found optimum bedding levels for each weather scenario. “In cold weather, there’s no added effect to using more than six bales of bedding per trailer, while in warm or mild weather there’s no added benefit to using more than three bales of bedding per trailer,” he said.

During the study the researchers found that the surface temperature of the pigs changed with the air temperature, and that increased surface temperature actually caused a negative effect on the pigs’ welfare, McGlone said. With the massive number of pigs processed daily across the United States, the findings have the potential to save industry more than $10 million annually, he said.