The university's judging program proved to be impressive at the National Western Stock Show and Rodeo. 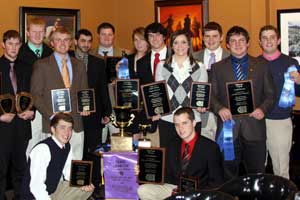 The teams placed in first, third and fourth, proving that Texas Tech’s judging program is one of the most consistent and competitive in the nation.

With teams coming in first, third and fourth places, Texas Tech’s meat, wool and livestock judging teams once again proved that Texas Tech’s judging program is one of the most consistent and competitive in the nation at the recent National Western Stock Show and Rodeo held in Denver, Colo.

“I am once again proud of the consistency we have developed in our judging program here at Tech,” said Horn Professor Mark Miller, co-coach of the meat judging team and the San Antonio Livestock Show Distinguished Chair in Meat Science.  “Each team has a competitive spirit that drives them to excellence.”

The team is coached by graduate students Collin Corbin and Henry Ruiz along with Miller.

The Wool Judging Team was narrowly defeated in its competition. Only one point separated the top three teams. South Dakota State won the contest with a score of 1,807. Texas A&M finished second with 1,806 points. Texas Tech finished third with the same score and won the grading division.

Individually, Tech had four members finish in the top ten:

The team is coached by graduate student Aaron Jennings and undergraduates Brittany Thompson and Trevor White.

Individually, Whitney Stuart, a junior from Fresno, Calif., ranked third in the competition.