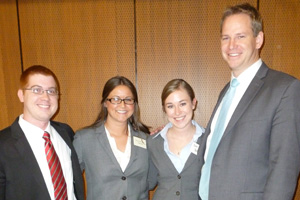 This is Texas Tech’s third ABA arbitration championship in the past five years, the last two coming in 2008 and 2010.

This is Texas Tech’s third ABA arbitration championship in the past five years, the last two coming in 2008 and 2010. The team is coached by Shery Kime-Goodwin, federal public defender and adjunct professor.

The team won its regional championship in November after going undefeated against teams from Texas, Louisiana and New York. The foursome continued winning in Chicago, never losing a round en route to the championship. The students defeated Stetson University College of Law in the semifinals and University of Missouri School of Law in the final round.