Joey Donaghy and Adam Testerman also won a spot in the National Parliamentary Tournament of Excellence. 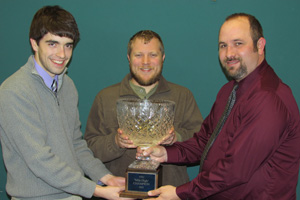 The victory at Western Washington University was the duo's fourth tournament championship of the year.

Texas Tech debaters Joey Donaghy and Adam Testerman entered the final round of the prestigious Mile High at Sea Level Swing needing a win to claim the top spot in the National Parliamentary Tournament of Excellence’s national rankings.

The pair did just that during the debate held Jan. 14-16 at Western Washington University, defeating Washburn University’s top team to claim their fourth tournament championship of the year and the No. 1 ranking.

By doing so, Donaghy and Testerman guaranteed their invitation to the National Parliamentary Tournament of Excellence, a March national tournament open only to the top sixty-four teams in the nation.

“Adam and Joey have been a dominant team this entire year, and it is nice to see that reflected in the NPTE rankings,” said Joe Gantt, director of forensics and head coach of the Tech team. “The win in Washington was the icing on the cake. With such a competitive and diverse set of opponents, Adam and Joey proved that they are one of the favorites to win a national championship in March.”

Debaters endured near-blizzard conditions that began on the last day of the tournament, dumping almost 10 inches of snow on the campus and nearly preventing the Texas Tech team from making its flight back to Lubbock.

At the first tournament, Donaghy, a sophomore political science major from Coppell, and Testerman, a senior communication studies major from Springfield, Mo., advanced to the semifinal debate before being defeated on a close decision by a team from the University of Texas at Tyler, the top ranked team at the time.

The three other Texas Tech teams in attendance in Washington also performed well, with each advancing to the elimination rounds of the tournament. The season-long performance of Laci Kennedy, a junior political science major from Bozeman, Mont., and J.T. Seymore, a junior communication studies major from Holliday, earned them 17th place in the nation. They also received an invitation to the NPTE.

Two other Texas Tech teams narrowly missed the first set of invitations, which were given out to the top 24 teams in the nation, but almost certainly will receive their bids in the second set of invitations in February: the team of Tyler Cashiola, a junior communication studies major from Deer Park, and Kevin Thompson, a freshman political science major from Rising Star, are ranked 26th, while the team of Sean Riegert, a senior political science major from Clear Lake, and Lauran Schaefer, a senior communication studies major from Sonora, are ranked 43rd.

The Texas Tech team next competes at the Western Forensics Association championships to be held Feb. 17-19 in Albuquerque, N.M. Rankings can be found at npte.debateaddict.com.