Walker replaces John Huffaker of Amarillo, who is resigning for business purposes. 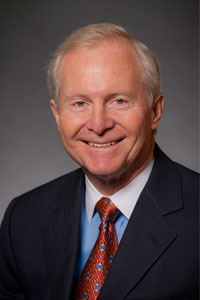 John Walker, who received his bachelor's degree from Texas Tech in 1968, was the Student Government Association president while he was on campus.

Gov. Rick Perry announced this afternoon (Jan. 24) his appointment of John Walker to the Board of Regents for the Texas Tech System.

Walker, of Houston, has been appointed to replace Regent John Huffaker of Amarillo. He will serve nearly a three-year term that ends Jan. 31, 2015. Huffaker is resigning for business purposes.

“This is a great appointment,” said Texas Tech University System Chancellor Kent Hance. “John Walker was the Student Government Association president while he was on campus. He loves Texas Tech and has been one of our most generous donors.”

Walker received a bachelor’s degree from Texas Tech University (1968) and a Master of Business Administration from New York University.

Huffaker was appointed in February 2009 and served as chairman of the Finance and Administration Committee, vice chairman of the Board of Trustees of the Carr Scholarship Foundation and a member of the Audit Committee.