The theatrical production will take place at 7 p.m. Dec. 15 in the Allen Theatre. 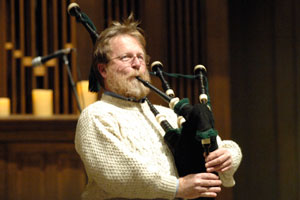 The event, which will be held in the Allen Theatre, will also be streamed live over the Internet.

The 11th annual Caprock Celtic Christmas takes place at 7 p.m. Dec. 15 in the Allen Theatre, and for the first time will be presented in a full theatrical production. The event also will be streamed live over the Internet.

“The Celtic Christmas is now in its 11th year as a fundraiser for the Vernacular Music Center Scholarship endowment,” said Christopher Smith, director of the Vernacular Music Center. “Its goal is to create a shared participatory experience of community for everyone present. It starts with a circle around a fireside, but that circle expands and expands to include everyone present and across the Internet.”

The Vernacular Music Center, College of Visual and Performing Arts, Caprock Celtic Association and Roots Music Institute will feature singers, players, musicians, storytellers and others who will perform traditional repertoires of the season, including traditional Irish, Welsh, Breton and English dance.

“We like the idea of an event which is built around a group of friends from diverse musical, personal and geographic groups from the campus and community,” Smith said. “At this point after 11 years, it kind of feels like a family reunion.”

The winner of Vernacular Music Center’s scholarship this year was Emily Furillo, the dance captain for the Texas Tech Celtic Ensemble.

To view the live stream of the concert click here.