Researchers found that participants gained an average of 1.7 pounds from November to January. 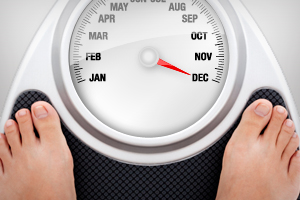 Some of the study subjects said they binged only on the actual holiday, while others said they grazed more throughout the season.

The average person gains about 2.2 pounds per year, and a recent study at Texas Tech indicates much of that weight may be put on during the holiday season.

“If people were more diligent about their eating and exercise during the holidays, they might be able to prevent this average yearly weight gain from happening,” said Jamie Cooper, an assistant professor in the Department of Nutrition, Hospitality and Retailing.

Cooper’s study compared the effects of the holidays on a person’s physique, primarily body weight and body composition (or body fat percentage).

She selected 148 subjects, 30 percent men and 70 percent women. The group ranged in age from 18 to 65 years.  Many were affiliated with Texas Tech or Texas Tech University Health Sciences in some way, while others came from the surrounding community. The sample included people not only with a healthy body mass index (BMI), but also the overweight and obese. About 60 percent said they exercised regularly, while the rest admitted they hardly exercised at all.

The study was advertised as a study in short-term changes in health parameters. Cooper said the volunteers were unaware that the study was intentionally set during the holiday period for fear that fact might contaminate the results.

As expected, all participants gained weight during this period, approximately 1.7 pounds on average.

“We found a significant increase in body weight, body fat percentage, and surprisingly – an increase in blood pressure,” Cooper said. “There was no distinction between genders.”
Some said they binged only on the actual holiday, while others said they grazed more throughout the season.  Cooper attributes this to seasonal gatherings where alcohol and sweets are common, and also eating-on-the-run when busy schedules prevail.

Subjects who were obese at the start of the study gained significantly more body fat than their counterparts. Non-exercisers showed a trend for more weight gain and body fat gain compared to exercisers.

These results led Cooper to the conclusion that even small changes in diet can lead to better health. She suggests everyone make time to exercise at least 30 minutes each day, perhaps as a family activity. Doing so might just make a person think twice about negating the effort of that exercise by reaching for a brownie or glass of egg nog, she said.