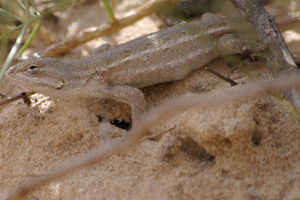 The sagebrush lizard already is labeled as endangered by the New Mexico Department of Game and Fish.

Citing dunes sagebrush lizard research done by Texas Tech University scientists, a recent letter from Sen. John Cornyn (R-Texas) may have helped to sway the U.S. Fish and Wildlife Service to delay a decision Thursday (Dec. 1) on listing the 3-inch-long reptile as an endangered species.

The service, which had planned to make a decision by Dec. 15, announced it would postpone for another six months.

A preliminary risk assessment for the lizard done by scientists at The Institute of Environmental and Human Health (TIEHH) tested the Fish and Wildlife Service’s list of possible human-created threats to the lizard.

“Based on our preliminary data, it didn’t appear certain factors listed as a concern to the lizard’s well-being could be contributing to impacts on the lizard,” said Todd Anderson, a professor of environmental chemistry at TIEHH. “In looking at the reasons why this species was proposed for listing, we developed a suite of preliminary studies that we thought would be helpful in figuring out what might be happening to this animal and the relationship, if any, to oil and gas production specifically.”

Already labeled as endangered by the New Mexico Dept. of Game and Fish, the species lives in sand dunes covered with shinnery oak in southeast New Mexico and West Texas, primarily in the Permian Basin. Scientists began warning about decreasing lizard numbers in 1997, and the species was nominated for protection in 2001, though the decision was delayed. 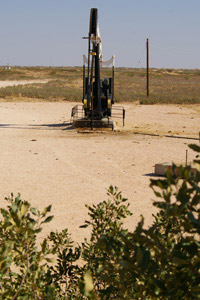 Texas Tech researchers found little evidence the contamination of dune sand by the oil industry has hurt the lizards.

Ranchers and the petroleum industry are worried that listing the species could cause major economic problems.

Some possible stressors cited by U.S. Fish and Wildlife included:

The researchers found little evidence that these issues were enough to significantly impact the lizard’s ability to live and breed.

“We didn’t find a lot of evidence that those stressors were that pronounced in areas that would be considered high oil and natural gas production activity,” said Chris Salice, an assistant professor of environmental toxicology. “We didn’t find high concentrations of hydrogen sulfide gas, although we did find some near oil pads. We found no relationship with oil and natural gas production and changes in sand characteristics with regard to pH and sand grain size. And we didn’t find any Tebuthiuron in the samples we analyzed.”

The team focused research efforts at University Lands, a large area of land near Andrews set aside for oil, gas and ranching leases by the University of Texas System.

Scientists studied eight different sites featuring dunes with shinnery habitats, some where lizard populations were observed and some without.

Salice cautioned the preliminary study is limited in scope, and would like to conduct a larger research study to better characterize those stressors across the range of the species to see if they are problematic or not.

“We have every intention of collecting more data this year,” he said. “This past year, we looked at the occurrence of hydrogen sulfide in the environment for a small area of land and found it in small amounts close to oil production. Considering the range of this species, which extends all the way into Eastern New Mexico, our study encompassed just a small portion of the total range.

However, he said no one knows the toxic effects that low levels of hydrogen sulfide gas may have on the animal.

“What we don’t know, and what nobody knows, is what the adverse effects could be if lizards were exposed to hydrogen sulfide even at low levels,” Salice said. “The big uncertainty is that perhaps those low concentrations have some sort of effect on the lizard, but at the moment, we don’t have any data on that. It may be that the low levels we observed are not toxic enough to kill the lizard, but perhaps make the species more susceptible to predation or alter its ability to capture certain prey items. These are research topics we’re pursuing right now with the western fence lizard, a surrogate species.”

The research was funded by the Permian Basin Petroleum Association.