The gift helps offset costs in the use of the functional magnetic resonance imaging machine (fMRI). 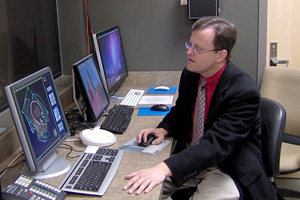 Would you like to donate a dollar to charity? How about a percentage of your income or a portion of your estate?

Texas Tech researchers are trying to better understand financial decisions like these. The funding comes courtesy of The CH Foundation, whose goal is to provide educational opportunities with long-term viability.

"The main areas where I do research are generosity and financial decision making having to do with charitable giving," said Russell James, associate professor and the first holder of The CH Foundation Endowed Chair of Personal Financial Planning. "I'm also interested in how a person perceives satisfaction with regard to their own financial circumstances."

Currently, James is focused on charitable bequests and estate planning.

Answers to these questions and others may be found at the Texas Tech Neuroimaging Institute. This facility is home to a functional magnetic resonance imaging machine (fMRI). Test subjects lie in the machine while being asked a series of questions relevant to the study. The computer then illustrates which area of the brain is activated during particular lines of questioning. Through this process, James hopes to learn more about what is involved in making such decisions.

Another aspect of his research is in a person's happiness level, specifically their financial well-being. In this study, the subject is first asked a series of questions about how things are going in general, and later they are asked the same questions with regard to their financial situation. Their answers will be compared and contrasted, while the fMRI machine determines which parts of their brains were activated. James said information like this could prove especially useful in the realm of economic recovery, and with the upcoming demographic shift in population where many non-profits could see an impact. 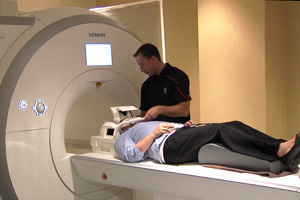 The functional magnetic resonance imaging machine (fMRI) helps illustrate which area of the brain is activated during particular lines of questioning.

"There are parts of the brain that are more involved with rational and logical decision making, other parts are more emotional or attached to particular kinds of feelings," James said. "The fMRI is an expensive proposition. To operate for testing at least 20 subjects and with a usage fee of $650 an hour, the endowment will enable us to continue to do that kind of research."

An endowed chair is among the most important gifts to higher education, a vital tool to ensure faculty excellence. And it provides another bonus, in that researchers know they will have it for an extended period of time. James said it can make the research even more effective. The College of Human Sciences is grateful to The CH Foundation for their support of the premier Personal Financial Planning program in the nation.

Counselors Around the World: Take Caution With Email Communication