Jason Jordan credits his achievement to the training he received at Texas Tech School of Law. 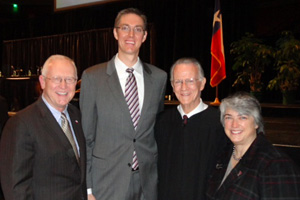 The legal training and preparation Jason Jordan received at the Texas Tech University School of Law demonstrated its value when he took the Texas Bar Exam last July. Jordan attained the third-highest score on the exam, which was also the highest score among graduates of Texas law schools.

Of the 2,740 examinees of the July 2011 bar exam, a student from the University of Virginia took the top spot, and a student from Brigham Young University scored second. Additionally, 90.51 percent of Texas Tech law students’ first-time takers passed the exam.

“Two factors that played a huge part in my success on the Bar Exam were the support I received from my family and friends and the practical legal education I obtained at Tech Law,” Jordan said. “As far as I am concerned, no other law school could have done a better job of equipping me with the skills and knowledge I needed to succeed on the Texas Bar Exam. As a student at Tech Law, I was able to take a variety of classes related to the most important topics on the Bar Exam, and I had the opportunity to learn from professors who cared about helping me understand the legal principles.”

“I believe my success on the Bar Exam proves not only that I made the correct decision about where to go to school, but also that Tech Law is doing the right things to prepare its graduates for the practice of law.”

Jordan, his wife Amanda and two-and-a-half-year-old son Jayce are living in Austin this year while he serves as a law clerk for Justice Phil Johnson of the Supreme Court of Texas. Next year they will move to Houston where he will serve as a law clerk for Judge Jennifer Walker Elrod of the United States Court of Appeals for the Fifth Circuit.

Jordan was a member of the national champion National Moot Court Competition team that took the title last February in New York.