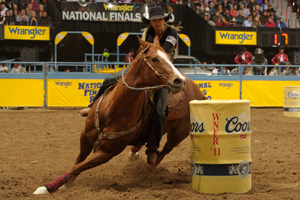 “World Champion” is becoming a familiar title for Lindsay Sears.

“Lindsay has been an awesome ambassador for Texas Tech, starting the first of her four years in the College of Agriculture Sciences and Natural Resources,” said Chris Guay, Texas Tech rodeo coach. “We are so pleased that she has now won her second world championship in the barrel racing event. Lindsay has always been a quiet, friendly and unassuming person; it couldn’t have happened to a nicer person.”

Another Texas Tech graduate, Adam Gray of Seymour, had a strong week in tie-down roping. A third-place finish in the final round and a tie for second in the average, moved him to ninth in the world standings. Gray tied his calf in 8.1 seconds Saturday.

Still another Texas Tech graduate, Wes Stevenson, qualified for the sixth time for the Las Vegas NFR. Guay said that Stevenson and his wife Francie met at Texas Tech and both graduated around 2002. Francie gave birth to the couple’s first child, a girl, last week.