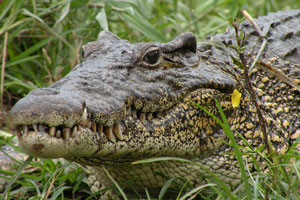 Cuban crocodiles are interbreeding in the wild with its American cousin, creating viable hybrids.

With bright coloration, more pebbled scaling and long, strong legs that allow it to leap, the Cuban crocodile’s ridged eyes give them a prehistoric countenance when compared to their Continental counterparts.

But the highly endangered croc may face a new threat – genetic pollution created by human interference with the animals’ habitat.

Researchers at Texas Tech were part of a study that discovered that the most terrestrial species of crocodile on the planet is interbreeding in the wild with its American cousin and creating viable hybrids.

If left unchecked, the researchers say the hybrids could take over, and the pure Cuban species could vanish forever.

While crocodile meat and skin traders have known for about 100 years that two similar species of crocodiles can mate in captivity, thereby allowing them to skirt protection laws, scientists only speculated that it could be happening in the wild.

A recent study published in the Journal of Experimental Zoology, done by Texas Tech researchers and others, is the first to confirm that wild hybridization is happening, said Lou Densmore, chairman of the Department of Biological Sciences.

“In lower vertebrates such as crocodiles, if you bring two close species together and they mate, then it’s almost certain that eggs will be fertilized and produce viable offspring,” Densmore said. “That’s something we’ve seen over and over again in captivity. Not only has it been shown to occur in unnatural conditions, such as zoos, but also we now know it’s actually occurring in the wild. Some of the students in my lab have shown the morphology of a hybrid can appear virtually identical to morphology of one of the parent species. That has probably led to misidentification of many, many animals in zoos and wildlife refuges throughout world.”

But not only that, as researchers began delving into the genetic makeup of the animals and compared it to their American cousins, they found hybridization may have been going on for thousands of years in other parts of the Caribbean. And what textbooks call the American crocodile (Crocodylus acutus) may actually be three separate species.

Cuban crocodiles, known as Crocodylus rhombifer, hunt mostly on land and are one of the most terrestrial-dwelling crocs in the world, said Miryam Venegas-Anaya, a graduate student at Texas Tech who also is affiliated with the Smithsonian Tropical Research Institute.

Living in two small enclaves in the Zapata Swamp and on Hope and Youth Islands, scientists estimate the Cuban crocodile population to be between 3,000 and 6,000. As adults, they prey on fish, turtles and small mammals. Their tall legs allow them to leap and hunt prey that may be resting on low branches. Fossil evidence suggests these animals may have adapted their leaping abilities and less-webbed back feet to hunt giant ground sloths.

Though nearly hunted to extinction up until the 1960s, conservation efforts have allowed the populations to recover slightly. The animal is listed as critically endangered on the IUCN Red List of Threatened Species. As understanding and conservation of the animal has increased in Cuba, the animal has become a cultural symbol of the island nation.

Unlike their American cousins who can live in almost any conditions and thrive in polluted waters, the Cuban crocodiles don’t care for saltwater, and prefer to hunt and live in freshwater marshes and swamps, Venegas-Anaya said.

At one time, they were found throughout the Caribbean. As sea levels rose with the end of the last ice age, those animals geographically trapped in Cuba carved a niche out for themselves and have stayed relatively the same to this day. However, Cuban crocodiles aren’t the only crocs on the island. American crocodiles – at least what is currently called American – also inhabit Cuba. 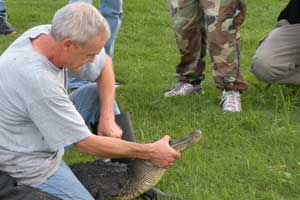 Densmore said if two close species of lower vertebrates are brought together and they mate, eggs are likely to be fertilized and produce viable offspring.

Geography allowed the Cuban crocodile population to stay marooned inside Zapata Swamp and other areas, Venegas-Anaya said. In the 20th century, people began cutting canals through the swamp, opening up waterways to the hardier, and more adaptable and invasive American crocodiles.

“We saw about 20 years ago that some crocodiles in Zapata Swamp looked like an intermediate type of crocodile,” she said. “Everybody started to think hybridization may be happening in the wild. We knew that crocodiles can hybridize in captivity. We didn’t know it happened naturally.”

To understand the crocodile hybridization problem, Venegas-Anaya and others decided they needed to get a better understanding of the genetic makeup of both Cuban crocodiles and American crocs.

“I believe that if you want to start studying evolutionary development of any species of animal, you need to collect samples from the entire range of their distribution,” she said. “There are so many genetic differences we don’t see morphologically with crocodiles, although genetically they can be very different. So, my first question was about the American crocodiles. Is there only one species in whole area in which it’s found, or was there range of subspecies? Their range is huge – from Venezuela, Central America and the Caribbean to the U.S.”

“We found The American crocodile group is more diverse than we suspected,” she said. “With American crocodiles, we have two main groups in South America and Central America. Then we have a group in the Caribbean that could almost be its own species. It’s completely distinct than what we know as entire range of distribution.”

To understand the story, go back sometime between 8 and 4 million years ago, Densmore said. Distant relatives of the Nile crocodile made their way from the West Coast of Africa to the New World.
As time passed, the colonizing crocodiles became the American, Cuban, Orinoco and Morelet’s crocodiles. Cubans were found in a larger region of the Caribbean until the end of the ice age, when they were marooned in Cuba.

“From the new DNA evidence, we think about 500,000 to 700,000 years ago, Cuban and American crocodiles mated in the Caribbean,” Venegas-Anaya said. “Eventually, the hybridized Cuban and American crocodiles differed morphologically and ecologically from their parent species. Then they were separated from the parent species by geography, different reproduction times of year and habitat.”

A scientist named Cuvier first described and named the American crocodile in 1807. However, Densmore said what Cuvier described was actually an animal found in the Caribbean, and was probably the older hybridized species that scientists are tentatively calling the Antillean crocodile. 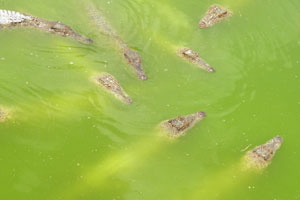 If hybrids take hold in the few places where pure Cuban crocodiles are found, it could spell the end of the Cuban species.

Now that the genetic information is better understood, scientists can do better conservation work with the Cuban crocodiles, said Jeremy Weaver a graduate student who analyzed the Cuban crocodile’s DNA during his undergraduate career at Texas Tech with the Howard Hughes Medical Institute Science Education Program at Center for the Integration of Science Education & Researech.

“We realized we didn’t know what a Cuban croc was genetically,” he said. “That turned into this whole world of issues that we found.”

For 20 years, Densmore had collected genetic samples from crocodiles in captivity, such as zoos, throughout North America. Weaver used these samples to begin his work. Rather than just look at mitochondrial DNA, which always comes from an offspring’s mother, Weaver also looked at markers on nuclear DNA inside the nucleus, which shares genetic information from the father and mother.

His findings opened up a new can of worms when he discovered that some animals which were believed to be purebred and used for breeding were actually hybridized.

“It irritated zookeepers,” Weaver said. “ The Cuban croc is a beautiful crocodile. People love to have them in their zoos. But if you tell someone that it looks like this animal might not be as pure as you thought it was, they may not want to agree with you.  But it is what it is. We found several zoos had highly admixed animals there.  But also, some zoos had purebred Cubans.”

The team hopes that the new genetic information will help scientists save the endangered animal. On top of humans bringing the two species together, climate change already has begun altering the Cuban crocodile’s habitat as dry spells last longer. The Cuban crocodile’s survival may be in the hands of humans in the end.

“If the population continues to decline, you want to know how to genetically characterize a breeding population in order to restock and release them,” Weaver said. “You don’t’ want to release hybrids out in to the wild. You’re just exacerbating the problem.”