Countdown to Carol of Lights: Saddle Tramps and High Riders Light the Way

Each year the spirit organizations help illuminate the event with torches and candles. 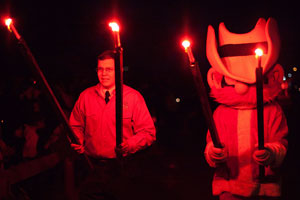 The Saddle Tramps, along with Raider Red, process two by two with flare torches to the math and science quad.

From the very beginning, Texas Tech spirit organizations have been at the center of Carol of Lights.

Saddle Tramps, established 75 years ago, serves primarily to enhance spirit and enthusiasm for men’s athletics. However, every December the Saddle Tramps, led by Raider Red, join the Texas Tech student body and Lubbock community in celebration of lighting the campus.

Beginning at the Texas Tech seal, the Saddle Tramps proceed two by two with flare torches to the math and science quad, which holds the wreath created for the event. Here, the members of Saddle Tramps are met by their sister organization, the High Riders, with candles illuminating the remainder of their path. The march culminates with the arrival of the Masked Rider, behind Saddle Tramps' nearly 60 members.

“We have our flares, and we have two lines that wrap around Memorial Circle as we process up to the front,” said Alex Lake, Saddle Tramps president. “It’s kind of like the Olympic torch where they run it all the way up to the front, and that’s when the Olympic Games start.”

Upon the arrival of the last Saddle Tramp and Masked Rider at the front, the Carol of Lights officially begins.

“We’re lighting the way for our brother organization in a tradition of spirit at Texas Tech,” Martin said.

Lake and Martin both said their groups feel lucky to be such an integral part of a tradition that not only Texas Tech students and faculty enjoy, but is celebrated by the entire community of Lubbock.

“We’ve always been workforces for the university, and we love to do whatever we are asked to do, whether it’s athletics or not,” Lake said. “It’s really just an honor to do anything, big or small, to support Texas Tech University.”