Countdown to Carol of Lights: Flipping of the Switch Still Main Attraction

The university currently is replacing old bulbs with more energy-efficient LED ones. 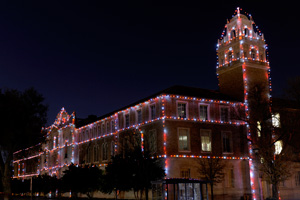 After the Carol of Lights, the 25,000 red, orange and white lights will be turned on from dusk until midnight through Jan. 1, 2012.

There are plenty of traditions and pageantry that serve as the perfect buildup for the Carol of Lights. But year after year, the main attraction remains the lights themselves.

Every year, 25,000 orange, red and white lights are strung, and then turned on in unison at the annual Carol of Lights. And while the breathtaking glow officially marks the beginning of the holiday season at Texas Tech, the school also is taking steps to conserve energy.

According to Stephen Howard, a foreman with the Texas Tech physical plant, the school currently is in the process of switching out its old bulbs to LED ones. The switch is being done in 20 percent increments, and this year 60 percent of the bulbs will be LED, which use less energy.

“They plan to complete the process at the 2013 Carol of Lights,” said Craig Kuehnert, manager for student development for the Residence Halls Association. “With the old bulbs, the school was paying on average $1,437 a month for the electricity bill. Once all the bulbs are replaced, they estimate that the bill will drop to $197.46. That’s more than an 80 percent decrease.”

The bulbs are being purchased locally and still are powered through the utility system that runs through the tunnels of the university. The lights also are connected to one common timer that controls when they turn on and off.

The honor of first turning on the lights on the night of the Carol of Lights belongs to the Residence Halls Association president. And this year, Nick Lamy will flip the switch that elicits the “oohs” and “ahs” from the crowd in attendance.

Countdown to Carol of Lights: Saddle Tramps and High Riders Light the Way