Assistant professor Mark Morton brings his loves of the Beatles' music to the classroom. 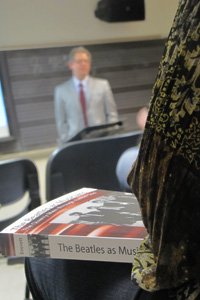 In his class, Morton makes a point to stay focused on the Beatles' music, rather than their story.

If he had stayed 30 minutes longer, he could have been one of the last people ever to see John Lennon alive. But after waiting outside the Dakota apartment building in New York City for more than an hour on Dec. 8, 1980, Mark Morton decided to move on.

“I was hanging out in front of his building thinking, ‘Oh maybe I’ll get to see John Lennon,’” said Morton, assistant professor of double bass at Texas Tech and longtime Beatles fanatic. “Had I hung around another half hour or 45 minutes, I would’ve been one of the last people to ever see him alive.”

All You Need is Love

Morton is bringing his love of the Beatles' music to Texas Tech for his class, The Music of The Beatles, where the curriculum focuses on the actual music from the famous rock band.

Morton started his love with the Beatles at a very young age. His aunt was president of the Dallas Chapter Beatles Fan Club and always showed him new Beatles music.

His desire to enter the teaching spectrum of his work, along with his love for the Beatles, inspired him to create this class.

“The idea behind the course is really to stay focused on the music as much as possible, which is why it’s called Music of the Beatles,” he said. “It’s a simple title but packed with meaning.”

Staying Focused on the Music

Courses about the Beatles are offered throughout institutions across the U.S, but what is unique about this course is Morton’s intent of staying focused on the music instead of the Beatles actual story.

“The Beatles’ story is so fascinating,” he said, “and there are so many facets that we could talk about, so many different things, and I do try to address those issues so long as it pertains to the music.”

The course is open to all majors, and Morton said his challenge is having to present the material in such a way that it stimulates and challenges the music majors, but does not overwhelm the non-music majors.

Morton said feedback from the students has been positive.

“I love Dr. Morton’s class,” said Sydney Pierce a junior animal sciences management and production major from Lubbock. “It’s different from any class I’ve ever taken. You can tell Dr. Morton is just as passionate about the Beatles’ music as the students who take his class.”

Pierce is not a music major but said the class has not been overwhelming because Morton is very good about translating the technicalities into easily understood terms.

“I think the subject matter is very entertaining to the students in that I believe some of the Beatles music has, in fact, reached the level of art, and I can tell the students have a good time in the class,” he said, “but at the same time there is some academic rigor and challenge.”