Texas Tech experts share advice on how smart choices now can help in the future. 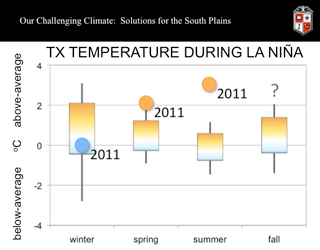 Hayhoe said the above-average temperatures is one reason why it’s important to conserve what we have and prepare for future change.

Experts from Texas Tech's Climate Science Center, Water Resources Center and Department of Landscape Architecture talked to about 150 homeowners, students and members of the media Thursday (Nov. 3) about how smart choices now can help us adapt to future extremes in West Texas.

Ron Roberts, chief meteorologist at KAMC-TV, served as moderator for Our Climate Challenge: Solutions on the South Plains.

The event provided information to residents in urban and suburban areas as to their impact on the environment and how conserving water and using more drought-tolerant landscaping can help homeowners save money and save a precious resource.

“Both average conditions and extremes are changing around the U.S. and the world,” said Katharine Hayhoe, director of the Climate Science Center. “Historically, this area has seen about 9 days per year where we’re at 100 degrees. Within 40 years, the average summer could have as many as 40 to 50 days at 100 degrees — just like we did in 2011. So that’s why it’s important to conserve what we have and prepare for future change.”

“We’re holding this event to start the conversation about our changing climate, its future effects on us and what we can do about it,” Hayhoe said. “Talking about the future isn’t a scare tactic to frighten us. It’s a chance to make some smart choices now so we can successfully cope with future change. Our weather affects all of us, from our economy to our water resources and our daily lives. We’re hoping to start talking about these issues now so we can adapt to changing climate extremes in a sensible and sustainable way.” 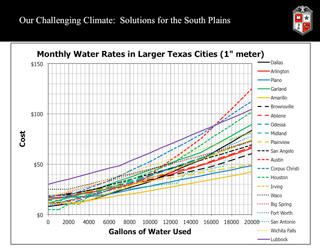 In Lubbock, the city consumes on average about 32 million gallons of water per day, 63 million in the summer.

In Lubbock, the city consumes on average about 32 million gallons of water per day. That number jumps to 63 million in the summer, most of which is used to irrigate landscaping.

“Water is never going to get cheaper,” he said. “This is not like electronics and computers and cell phones and thumb drives. We need to understand that there are some costs in providing that water so that it’s safe for consumption. How much water we use affects how much we pay for it.”

Pat Westbrook, assistant professor in the Department of Landscape Architecture, said making changes to landscaping could have a big difference in the amount of water a home consumes in a year.

As next spring rolls around, many homeowners may find some of their landscaping hasn’t made it through this drought, or perhaps won’t make it through next year’s predicted La Nina year.

She suggested homeowners should look at more drought-resistant plants and begin making some changes toward xeriscaping their yards. Though many may associate xeriscaping with rocked-in yards and a single juniper or yucca as a centerpiece, she said actual xeriscaping includes low-maintenance, drought tolerant plants and even some turf grass designed to create an oasis feeling.

The best plan is to have a plan, she said. However, making changes with more drought-tolerant landscaping doesn’t have to be an expensive, all-out drastic change. Nor does it mean ripping out the entire lawn.

Westbrook said she and others in the Department of Landscape Architecture plan to host a design workshop for homeowners and business owners sometime in March.