This is the first time Texas Tech students have been selected for the coed partner stunt competition. 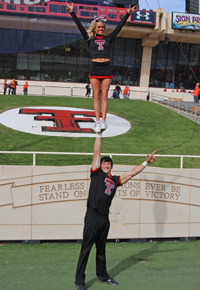 Lyday and Drake placed fourth in the video selection process.

The qualifying couples are second-year members Tanner Lyday from Lewisville and Kymber Drake of New Braunfels, whose video placed fourth; and Calvin Beene, a first-year member from Humble, and another second-year member, Marissa Taylor from Farmersville, who were 13th.

Spirit squad supervisor Stephanie Rhode said the squad had sent in videos before, with no luck being chosen to compete.

“This is the first time we’ve had students selected,” Rhode said. “They have worked extremely hard for this recognition.”

Invitations were given based on a videotape entry submitted by each school. Of 29 couples from across the country, 14 were chosen to compete. The pairs must perform a one-minute routine of complicated partner stunts set to music. Routines are judged on execution, difficulty and showmanship.

Bridal Fashion Show: Say Yes to the Dress, or Pants?