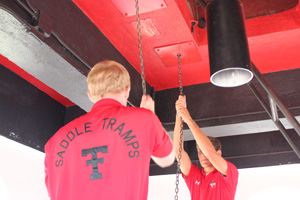 The Saddle Tramps ring the Victory Bells after every Texas Tech athletic victory and for special occassions.

Members of the Saddle Tramps are pretty easy to spot on game days. Wearing solid red shirts with “Saddle Tramps” embroidered on the back, and toting cowbells with oversized handles, they hardly go unnoticed.

The same can be said about the group’s role as Texas Tech University’s oldest school-spirit organization. From decorating campus on game days to ringing the Victory Bells, no group does more to uphold the school’s traditions and spirit.

It’s been that way since 1936 when Arch Lamb founded the all-male booster organization to support Texas Tech men’s athletics. The name Saddle Tramps came from the stories of traveling men, who came to a farm for a brief time, fixed some things and moved on. Lamb wanted to do the same thing – better Texas Tech before he graduated – so he created the Saddle Tramps.

That’s especially true for athletics. Here are just some of the athletics traditions in which the Saddle Tramps partake:

Over the years the organization has taken on more non-athletic duties, as well, most notably leading a procession at the Carol of Lights.

In recent history they’ve also become fixtures in the Lubbock community, all with one goal in mind: promoting Texas Tech.

“I think when you look down deep inside each of them, they just want Texas Tech to be great,” said Snead, who’s also the associate vice president for the Texas Tech Alumni Association. “It’s great to see young people who still embody the spirit that Arch Lamb had in 1936.”

The Saddle Tramps celebrated their 75th anniversary with a reunion breakfast the weekend of the Texas Tech-Texas A&M game. More than 300 former Saddle Tramps attended, and more than 100 former and current members shared the field before the big game’s kickoff. 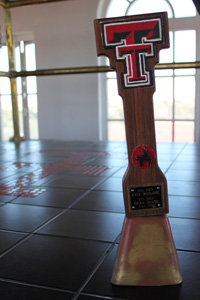 The Saddle Tramps also are known for their cowbells, which they constantly ring at football games.

One of the former Saddle Tramps at the reunion was Texas Tech University System Chancellor Kent Hance. Hance recalls being in charge of ringing the Victory Bells back in 1962, along with former Speaker of the Texas House of Representatives, Tom Craddick.  The Red Raiders football team finished 1-9 that year, but Hance vividly remembers ringing the Victory Bells following a 21-12 victory over Colorado in a snowstorm in Lubbock.

“First thing, congratulations to the Saddle Tramps for having their 75th anniversary,” Hance said. “I’m always excited to see a Saddle Tramp walking around, and I always let them know I appreciate the job they’re doing. They help Texas Tech in many ways, and I’m proud of them.”

Hance said being a part of the Saddle Tramps helped prepare him for his political career, as well as his role as chancellor.

“It helped me learn how to budget my time, and that was a great benefit to me in my career,” Hance said. “It also helped me make a lot of friends who have helped me. A lot of those friendships have been lasting friendships.”

Lake’s father was a Saddle Tramp in the late 1970s. “But I got into this all on my own,” he said. “I didn’t come here wanting to do this, but once I got into it, I never wanted to leave.”

That’s a big reason why the organization has lasted 75 years: each year brings a new crop of students who believe in the foundation Lamb laid for school spirit at Texas Tech.

“I think the Saddle Tramps is an organization that will survive as long as Texas Tech survives,” Lake said.

After 75 Years, Victory Bells Still Ring Out Across Campus