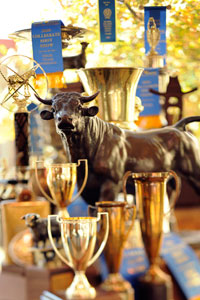 “This team committed themselves to being the best,” said Mark Miller, a Texas Tech Horn Professor and San Antonio Livestock Show Distinguished Chair in Meat Science. “They were unselfish and weren’t worried about their individual achievements. This resulted in one of the most consistent finishes I have ever seen in a meat judging contest.”

Texas Tech boasts a total of nine national championships in intercollegiate meat judging and has won 22 of its past 28 competitions.

Additional team members include Blaine Corliss, a senior from Estancia, N.M.; Mandy-Jo Laurent, a junior from Nacogdoches; Cody Sultenfuss, a junior from Little-River Academy; and Kaitlyn True, a junior from Plainview. The team is coached by Miller and graduate student Shanna Ward.

Team members Begley, McMath and Smith were named 2011 First Team All-American members. Williams was named a 2011 Second Team All-American Team member. All-American team members are selected based upon scholastic achievement and competition performance. The prestigious Rachel Hamilton Spirit Award was given to Sultenfuss in recognition of the commitment, dedication and teamwork he displayed during his meat judging career.