The Red Raiders competed against more than 30 teams, winning the contest by 31 points. 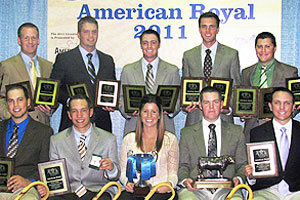 Thirty-two teams competed in 12 classes of livestock, containing four animals each. Classes included both breeding and market animals in beef, sheep/goat, and swine divisions. The contestants then appeared before the judges to present eight sets of oral reasons.

In addition, Texas Tech took first place in the beef judging and oral reasons divisions, as well as garnering three of the top ten individual spots. Capps received fourth place honors, while teammate Clem was only three points behind her for a sixth place finish. Burson finished in ninth place overall.

The group is coached by Ryan Rathmann, an assistant professor in the Department of Animal and Food Sciences, along with graduate student Bryan Bernhard.The team will compete for the national livestock judging championship later this month at the North American International Livestock Exposition in Louisville.

The 112-year-old American Royal, one of Kansas City’s premier fall events, annually hosts intercollegiate livestock judging contests, along with one of the Midwest’s largest and oldest livestock exhibitions and professional rodeos. During September, October and November, more than 250,000 people attend the American Royal events.