The Red Raiders won the event by 31 points to cap their dominant performance this year. 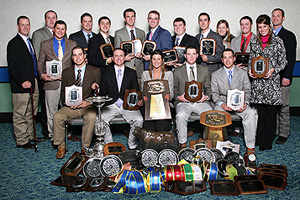 The Red Raiders won the overall reasons and swine divisions, were second in the cattle division and placed third in the sheep division.

“I’m proud of their achievements, but I’m more excited to see the difference this experience will make in their lives,” said Ryan Rathmann, an assistant professor and the team’s coach.

Rathmann was named the coach of the year at the exposition. Graduate student Bryan Bernhard also coached alongside Rathmann.

NAILE awarded 10 individuals All-American honors, of which Texas Tech won six. The honorees included, Burson, Gardner, Lucherk, Pritchett, Ragland and Woolley. The All-American awards program, initiated by the University Livestock Judging Team Coaches’ Association in 2000, is designed to recognize students who have made a personal commitment to livestock judging and have also excelled in academics, university and industry activities and community service.

This year the team won competitions at the Houston Livestock Show & Rodeo, National Barrow Show, Tulsa State Fair, State Fair of Texas and American Royal. The Red Raiders are only the 11th team in the history of livestock judging to win both the American Royal and the NAILE.