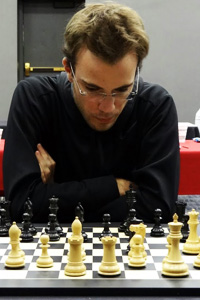 Meier, a freshman from Germany, is now being trained by Grandmaster Susan Polgar.

Grandmaster Georg Meier, co-captain of the Texas Tech Knight Raiders, has defeated a former top 10 world professional chess player, Sergei Movsesian of Armenia. The win came in the final round of the 2011 European Team Championship.

Meier, a freshman from Germany, tied for second place last month in the 2011 SPICE Cup at Texas Tech, along with Cuban Grandmaster Leinier Doniguez, a former World Blitz champion.

Meier also tied for first and beat Grandmaster Le Quang Liem of Vietnam in the playoff at the 2011 SPICE Cup Blitz Championship.

“One of the top young talents in the world, Meier is the best German-born player in the past two decades,” said Paul Truong, marketing director for the Susan Polgar Institute for Chess Excellence (SPICE). “Last year, he decided to give up his very lucrative professional career with Baden Baden, the top club team in Chess Bundesliga, to join the SPICE program at Texas Tech.”

He is now being trained by Grandmaster Susan Polgar, winner of four Women’s World Championships and five Olympiad Gold Medals.

Meier will play board one for the Texas Tech Knight Raiders, the No. 1 ranked collegiate team in the nation with four Grandmasters, at the 2011 PanAm Collegiate Championship in Dallas in December. He will also lead the Knight Raiders in their title defense at the 2012 Final Four in Washington, D.C.

Bridal Fashion Show: Say Yes to the Dress, or Pants?