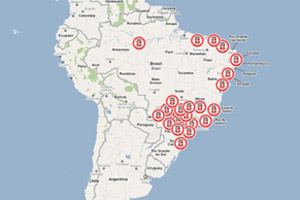 As of 2011, the longtime partnership between Texas Tech University Independent School District and Brazil has reached 24 schools.

What started as a simple task of a Brazilian school administrator in 1999 to improve a local school’s English program has led to an ever-growing, longtime partnership with Texas Tech University Independent School District and more than 20 high schools throughout Brazil.

As of 2011, Texas Tech University High School’s (TTUHS) full-English curriculum, consisting of American high school courses such as literature, writing, history, economics, government and public speaking, has been implemented in 24 schools within Brazil.

Texas Tech Provost Bob Smith recently flew to Brazil to spend four days working with students and serve as the commencement speaker at this fall’s graduation.

“They’re mature, they’re poised, they’re bright and their English skills are excellent,” Smith said in reference to the students he met. “The students that I spoke with, they spoke as well as any student on our campus. It’s very impressive.”

Rogério Abaurre, coordinator of the TTUHS programs in Brazil, said when he first touched base with TTUISD about establishing a program in Brazil in 1999, the level of English taught at most of Brazilian schools did not go far beyond “survival” or “touristic” English.

“That level of English would enable the students to communicate at a very elementary level,” Abaurre said. “At that time, Brazil was rapidly emerging as a strong economy, and started attracting multinational companies from all over the world. Administrators quickly anticipated a scenario in which our students would need to learn how to speak, listen, read and write in English, not only at a touristic level, but at a professional level as well.”

From Dream to Reality

After a number strategic conferences with Gilbert Weaver, then-TTUISD superintendent, other steps followed to make the program a reality. The program selected and hired native speakers of the language as teachers, prepared a special classroom to host the program and began enrolling students in February 2000. 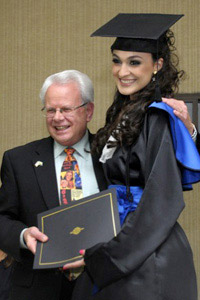 Provost Smith spent four days working with students and served as the commencement speaker at their fall graduation.

In order to cater to native Brazilian students, administrators developed their own books, adding glossaries for unknown words and extended literary references.

Júlia Fiorin de Vasconcellos, the valedictorian of the 2002 class, said she was very proud to have graduated from the TTUHS Brazil program.

“Along the program, I could perceive how my English was getting much better, as I could argue with the teachers and my friends for hours, speaking, and mostly important, thinking in English,” Vasconcellos said. “Now that I have been exposed to judicial books and articles, written in English and not yet translated to Portuguese, I can understand how this going to help me stay ahead in my college studies.”

Julia now works as a legal consultant for intellectual property issues at a law firm in Washington, D.C.

Smith said it was clear during his visit the Brazilian students valued the English proficiency provided by the TTUHS curriculum.

“They’re learning not only about America, but they are also learning in English and developing English proficiency, so they can function in the English-speaking world that drives commerce, and democracy-building all over the world,” Smith said.

For many of the TTUISD graduates who expressed interest in the fields of law, medicine and administration, proficiency developed through the TTUHS English curriculum is key.

However, developing fluency in any second language often requires years of intensive work.

“The TTUISD students go to high school from 7 in the morning to 5 at night,” Smith said. “They all take the Portuguese courses, but then they spend an average of a couple hours a day in our curriculum, namely a Texas-certified curriculum, so that when they finish after four years, they receive a Brazilian diploma from the school they are attending and a TTUISD diploma.”

Smith said the commencement speech he shared with the Brazilian graduates was the same message he portrays to any individual within that age range: lifelong learning, loving and serving.

“The talk was all about developing a framework in college for learning for the rest of your life and about understanding how you weave learning, loving and serving together with being a good citizen of the world and to end your days, as all of us hope, making a difference in the world,” Smith said. 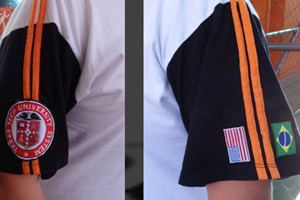 The United States, Brazil and Texas Tech merge to make a lasting impact on Brazilian students.

Prior to leaving, Smith commissioned a translated synopsis of his speech, accomplished by Professor Antonio Ladiera in the Department of Classical and Modern Languages, so attendees could take away a tangible summary of his presentation.

Both Abaurre and Smith mentioned their excitement for the new program Texas Tech will host summer 2012 in an effort to recruit TTUHS Brazil students to Texas Tech.

“Brazilian students will be able to spend almost two weeks living on the campus and taking part on academic, cultural, and recreational activities, along with other American and international students,” Abaurre said.

“There is a potential for extending the program into other countries in South America, particularly Chile and Argentina,” Smith said. “If that were to happen, I think we could legitimately make the claim that we have the premier and most extensive English-language high school diploma program on the entire South American continent.”

For more information about the TTUHS program, visit the University College TTUISD website at http://www.depts.ttu.edu/uc/k-12.