Forrest Sheng Bao said one of the qualities he loves most about Texas Tech is the diversity. 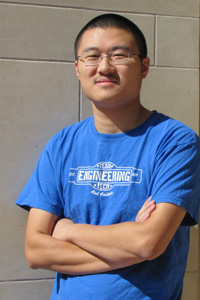 When speaking about his future career in academia, Bao references his favorite American movie by saying, "Life was like a box of chocolates."

An American Hollywood classic and a firm grasp on his heritage led a Texas Tech doctoral student to an interesting choice for an English name.

Forrest Sheng Bao, a Chinese native working on his doctorate in computer science and master's in electrical engineering, said his given Chinese name “Sheng” literally means flourishing and is specifically used for describing trees. Furthermore, Bao attributes much of his name choice to the well-known movie “Forrest Gump.”

“I really liked that guy. He has many good characteristics,” Bao said. “For example, he always sticks to his dreams, keeps his promises and loves his girl. And he likes to run. Me too!”

At first Bao used Forrest as a pen name when publishing papers he wrote in the Department of Computer Science, but in time he found himself using it almost everywhere.

Bao said his desire to explore and travel many places led him to pursue his graduate career overseas. After earning his bachelor’s degree in electrical engineering from Nanjing University of Posts and Telecommunications in 2006, he applied to graduate schools in both Canada and the U.S. With an array of options, he decided on Texas Tech.

Adjusting to the American Lifestyle

As excited as he was to begin research in a new location, Bao, who has now lived in Lubbock nearly five years, recalls a few humorous stories from his adjustment period to the American way of life.

“I learned English from watching movies and shows and reading,” Bao said. “In Hollywood movies, there are many adult words, which I know now are inappropriate. But I didn’t know that then. I thought everyone spoke them in America. So, as you can expect, I gave myself some troubles at first.”

American movies also impacted the way Bao handled problematic situations. He laughs as he describes the first time the air conditioner in his lab leaked.

“The ceiling was so wet that it fell off. It was about 6 p.m., and I was so freaked out,” Bao said.  “It was my third week in America. Using the ‘knowledge’ I learned from movies, I called 9-1-1. This was the first time in my life that I called cops. I didn’t know how to start. So, again, using the ‘knowledge’ I learned from movies, I said ‘Sir, we have a situation.’ I guess I really scared the officer. Anyway, in the end they came and called the plumbers for me.”

Despite minor adjustments natural to a culture change, Bao said he’s really enjoyed his time at Texas Tech. One of the qualities he loves most about the school is its diversity.

Bao’s current doctoral research is about the integration of numeric constraint solving and logical reasoning to make computers “smarter,” with the goal of dealing with problems such as medical diagnosis or automated planning.

In extension, Bao also studies the application of computing on medical and biological domains, such as computational neuroscience.

“I am now contributing to an NIH-funded project called MindBoggle,” Bao said. “We are using mathematical methods to extract anatomical structures on the cerebral cortex for automated brain labeling and potential diagnosis of some neurological disorders.”

With regard to his future, Bao, who hopes to continue a career in academia, references one of his favorite American movies.

“Forrest Gump’s mom always says, ‘Life was like a box of chocolates. You never know what you’re gonna get.’ I am still thinking about this,” Bao said. “I want be able to try out different creative jobs at different artistic workplaces. Most likely, I will seek a faculty position in a colorful building.”