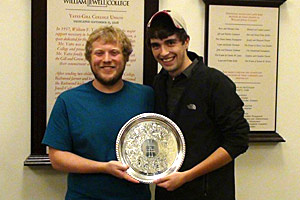 Testerman, left, and Donaghy are the second non-Northwest team in the last ten years to win the Lewis & Clark championship.

The Texas Tech Debate Team continued its hot start to the season with two more wins at tournaments held Oct. 7-9 at Lewis & Clark College in Portland, Ore., and Oct. 28-29 at The Colorado College in Colorado Springs, Colo.

With the wins, Texas Tech debate has won tournaments in each of the four weekends that they have traveled and are currently the top ranked school in the nation according to the National Parliamentary Debate Association.

“After the great weekends we had to open the season, it was always going to be hard to maintain that momentum throughout the rest of the semester,” said Joe Gantt, director of forensics and head coach. “This team proved that they can do it.”

Two Texas Tech teams traveled to Portland to challenge the Pacific Northwest’s best parliamentary debate teams at the Steve Hunt Classic at Lewis & Clark College. The tournament drew a competitive field, including teams from the University of Oregon, University of Washington, Whitman College and Willamette University.

Donaghy and Testerman became only the second non-Northwest team in the last ten years to win the Lewis & Clark championship.

The team of Laci Kennedy, a junior political science major from Bozeman, Mont.,  and partner JT Seymore, a junior communication studies major from Holliday, also had a strong performance, losing only two debates out of eight and finishing fifth in the tournament. All four Texas Tech debaters were recognized among the top twenty individual speakers at the competition.

Donaghy and Testerman continued their torrid start to the season by capturing yet another title, the Al Johnson Invitational at The Colorado College. Historically one of the strongest parliamentary debate tournaments in the nation, this year’s field consisted of teams from Pepperdine University, The United States Air Force Academy and the University of Colorado-Boulder, among others.

Donaghy and Testerman won eleven debates and lost only one, this time defeating a team from William Jewell College to win the varsity championship. Donaghy and Testerman have now won three out of the four tournaments they have competed at this year, a feat achieved by no other team in the country, and they have won 38 debates while losing only three this season.

The varsity win was complemented by a championship in the junior varsity division by the team of Drew Hoffmaster, a freshman chemical engineering major from Alief, and Dylan Nikoletopoulos, a freshman pre-journalism major from Bozeman, Mont., who also won 11 out of 12 debates at the tournament to take the title.

Other strong performances by Tech debate teams included a fifth-place showing in varsity by Kennedy and Seymore, a tie for ninth place in varsity by the team of Sean Riegert, a senior political science major from Clear Lake, and Lauran Schaefer, a senior communication studies major from Sonora,  as well as the team of Tyler Cashiola, a junior communication studies major from Deer Park, and Kevin Thompson, a freshman political science major from Rising Star.

There also was a third-place finish in junior varsity by the team of Jett Elliott, a freshman chemistry major from Clear Lake, and partner Zach Wesley, a freshman communication studies major from Crandall.

Cashiola, Donaghy, Elliott, Hoffmaster, Nikoletopolous, Schaefer, Testerman and Wesley were all named among the top individual speakers at the tournament. With all of the team contributing to the success, Texas Tech was once again named the top debate school at the competition.

“Whether it be wins in varsity from Joey and Adam, wins in junior varsity with Dylan and Drew, or top-ten finishes by every member of the team, top to bottom this is the best squad I have ever had the opportunity to coach,” Gantt said. “They are a credit to Texas Tech University.”

The team next travels Nov. 11-13 to the Capital City Classic to be held at Washburn University in Topeka, Kan.