The 38-feet-tall and 20-feet-wide tree creates a grand entrance for the university campus. 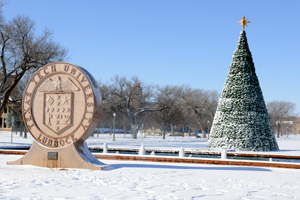 Students, faculty and the Lubbock community gather to see the tree and celebrate the holiday season on the Texas Tech campus.

The Christmas season would not be complete without a brilliantly lit, statuesque Christmas tree as the focal point of any home. Being that Texas Tech University is home to more than 32,000 students, the tree does not disappoint.

Standing 38-feet-tall and roughly 20-feet-wide at its base, the tree is positioned behind the Texas Tech seal at the Broadway entrance of campus. Until 2008, the tree had been placed in Memorial Circle, but since the tree is so large it seemed more appropriate to place it closer to the seal to create more of a grand entrance.

Purchased in 2002 by former Board of Regents member Jim Sowell, the tree, which is lit on the night of Carol of Lights, would cost roughly $50,000 to replace and takes two days to assemble by the Grounds Maintenance crew.

As anticipation for Carol of Lights builds, people from the Lubbock community and beyond travel to see the tree and celebrate the holiday season on the Texas Tech campus.

Manager for student leadership development Craig Kuehnert said each evening while the lights are lit, many people take photos in front of the tree.

“There have been times in the past where school-age children have also made decorations and hung them on the low limbs of the tree,” Kuehnert said.

While the tree is only one component of the Carol of Lights event, it has become a sought-after spectacle each holiday season for students, faculty and the Lubbock community.