For the first time in 26 years, the carillon bells will be rung by a new player during the annual event. 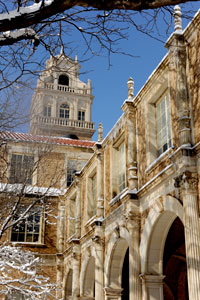 This year the carillon bells, comprised of 43 bells, will be played by student Bryan Donald.

For the first time since 1985, the carillon bells will have a different ring to them at this year’s Carol of Lights. This year marks the first year Arla Jo Anderton will not play the 43-bell instrument at Texas Tech’s annual holiday event.

“The Carol of Lights has been the most special tradition involving the carillon,” Anderton said. “Any change in our lives that points out our own aging process brings with it a certain sadness, but knowing that Tech students are continuing this special tradition is exciting to me.”

In 1973 Ruth Larabee made a donation to Texas Tech to buy and install the bells in memory of her parents, Charles and Ruth Baird. The instrument originally was composed of 36 bells but was expanded to 43 in 2005. It is valued at more than $250,000.

The largest of the 43 bells is called a bourdon and weighs approximately 800 pounds, compared to the smallest bell that weighs only eight pounds. The smaller bells are played by striking half-closed hands on a keyboard, while the larger bells are attached to foot pedals.

The Carol of Lights event begins with the Carillon Concert. Student Bryan Donald will be playing the bells this year.

“A carillon is the largest of all musical instruments,” Anderton said. “They weigh tons and were found in European town squares and would ring out on market days. Our own bells have tolled in sorrow for the Challenger astronauts and for Tech’s own who have passed away. They have rung out in joy on game days and the Fourth of July. It is only fitting that they open the Carol of Lights, a tradition not only for those on campus but for all of Lubbock.”

The 53rd Annual Carol of Lights to be Celebrated