T.S. Monk will perform at 7 p.m. Nov. 11 as part of the Presidential Lecture and Performance Series. 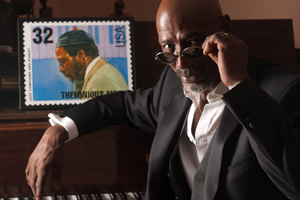 Monk formed his jazz sextet in 1992 and received rave reviews from the moment it hit the stage.

American jazz drummer, composer and bandleader T.S. Monk performs with his jazz sextet at 7 p.m., Nov. 11 in the Allen Theatre at Texas Tech for the Presidential Lecture and Performance Series.

“T.S. Monk is special because he’s managed to establish his own successful career in the shadow of his father, which doesn’t often happen in jazz,” said Stephen Jones, director of jazz studies at Texas Tech.”

T.S. Monk was drawn to the drums at the age of 10, and after graduating high school, joined his father on tour until his retirement in 1975.

In between his father’s retirement and forming his sextet, Monk toured with many different groups, from Natural Essence to his sister Barbara Monk.

In 1992, Monk formed his jazz sextet and received rave reviews from the moment it hit the stage and the studio. His sextet is comprised of Helen Sung (piano), Erik Privert (bass), Bruce Harris (trumpet) and Willie Williams (tenor sax).

A CD signing will take place immediately following the performance.