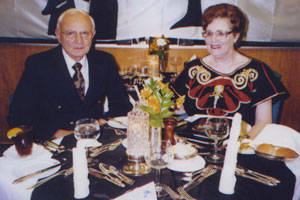 George Tereshkovich boarded the SS Rotterdam with late wife, June. This is a photograph of one of the many dinners the couple enjoyed during their 102-day cruise.

Perhaps, the lucky numbers of his stateroom – 711 – inspired his experiment.

Leaving Honolulu far behind on the way to French Polynesia sometime after the equatorial crossing ceremonies aboard Holland-America’s grand ocean liner, SS Rotterdam, George Tereshkovich sat down at the writing desk.

The retired Texas Tech plant and soil science professor dated his missive Feb. 19, 1997, and addressed it to an anonymous recipient who might find it and promised him or her a kingly $5. When finished, he placed that letter and his business card in an empty water bottle, screwed on the cap and walked out onto the aft deck.

As the sun set and the screws churned a white froth below him, Tereshkovich tossed his message into the vast blue ocean spreading out before him.

“I told the wife what I was going to do,” the 81-year-old said. “She thought I was seasick or something, throwing a note overboard. We continued cruising, and I completely forgot about it.”

Fourteen years later, his message in a bottle would turn up more than 6,000 miles away (a quarter of the Earth’s circumference) in the dunes of the beaches of Southwestern Australia’s Big Quaram Beach.

Little did he know he’d wind up owing someone that $5.

Cruise of a Lifetime

On Aug. 31, 1995, Tereshkovich’s 27-year career came to an end at Texas Tech’s College of Agricultural Sciences and Natural Resources. To celebrate, he and his wife decided to book a 102-day world cruise in 1997 aboard Rotterdam.

The ship, known as the “Grande Dame,” was one of the world’s most successful cruise liners. The fifth liner to carry the name, she was launched by Holland’s Queen Juliana in a gala ceremony on Sept. 13, 1958. The Rotterdam was the last great Dutch ship of state, and was making her final trip around the globe before she would be retired in 2000.

Tereschkovich and his wife, lifelong cruisers, left from San Diego to go around the world and disembark in Ft. Lauderdale 102 days later. Right after crossing the equator, the idea for the experiment hit him.

“I remember I wrote February 1997, and I told them I was on a world cruise with my wife,” he said. “I said ‘to the finder of this note, I will award them $5 if they send me the message back.’ But I wondered, ‘What address do I give to return my letter?’ Well, I knew that Texas Tech University was always going to be here, so I used a Texas Tech address, put my business card in there and I threw it overboard.” 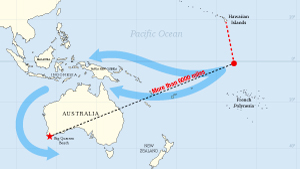 No one knows for sure what route the message in the bottle took, but it was found more than 6,000 miles from the estimated point it was cast. (Click to enlarge.)

In late April 2011, Diane Chanut and her partner, Luke McLaren, vacationed at Big Quaram Beach in Southwestern Australia enjoying a week’s worth of hiking on the Bibbulmun track.

Luke serves as a ranger with Parks & Wildlife Service Northern Territory at Ormiston Gorge Ranger Station – part of the West MacDonnell National Park in the Northern Territory, while Diane is a tour guide on the Larapinta Trail, also in the park.

The couple said they planned the vacation to get away from the dusty, dry climate of the continent’s interior.

Because of the beach’s remoteness, Chanut said the couple had just joked with each other about the chances of finding a message in a bottle. One of Chanut’s friends is a kayaker in Papua, New Guinea, and she said he often throws messages in bottles out into the water.

“Little did we know,” Chanut said. “I caught sight of the bottle on a dune a bit out from the tide line, and Luke volunteered to go check it out. What was our surprise when, upon inspection, the said bottle did include some form of paper in it. We opened up the bottle to get the piece of paper out.  It was very faded by the sun, but we managed to read it and also found the attached business card which was in very good condition.  We celebrated the occasion by taking a picture as we knew we were going to follow up on this extraordinary find and strive to get in touch with the sender.” 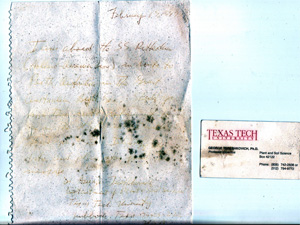 The letter was difficult to read because of sun damage, but the Australian couple said the Texas Tech business card was in good condition. (Click to enlarge.)

I am aboard the SS Rotterdam (Holland-America line) en route to Perth, Australia in the Great Australian Bight Sea.  Should you find this note [undecipherable words] date and place you found the message.

At first, Chanut said she wasn’t sure she was going to answer the letter. She and McLaren did wonder for a short time if the letter could be a scam. But the condition of the bottle and the letter convinced the pair about its authenticity, and the two decided to follow up on contacting the writer.

“I obviously wasn’t sure if we were going to get an answer or not, but I figured that if the person who dropped the bottle went through this exercise, they would probably be glad to get an answer and thus would probably get back to us,” Chanut said. “Also, the university address was a good place to make sure we would be able to track down the whereabouts of the sender in case he was no longer working there, so that was also upping our chances of hearing back from the mysterious sender.”

Chanut said she began googling Tereshkovich’s name to find out more about who he was and whether she could track down a university email address for him. As she was unsuccessful, she decided to email the dean’s office at the College of Agricultural Sciences and Natural Resources to ask how to get in touch with the retired professor.

Since the time he wrote the letter, Tereshkovich had moved to Austin, and never was a big believer in email. A secretary in the dean’s office wrote back to Chanut saying that she would pass her note along to Tereshkovich to let him know his message in a bottle had been found. 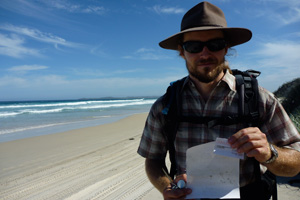 Luke McLaren and his partner Diane Chanut found the message in a bottle on a dune out from the tide line of Southwestern Australia’s Big Quaram Beach.

A few days later, Tereshkovich walked out to get his mail. He found a letter from Texas Tech in his box.

“I thought, ‘Here’s the dean asking for more money,’” he said, joking. “I opened it up. When I read it, I was stunned someone found my bottle with the message.”

And the rest is history as they say, Chanut said.

“We were completely blown away when we received Dr. T’s letter a few days after that,” Chanut said. “It was so heartfelt and so generous to us. He included some souvenirs from the U.S., such as postcards from his home in Lubbock, a couple of $2 notes and the ‘reward’ he remembered promising in his letter ($5 plus inflation from 1997), so we could treat ourselves to a nice bottle of Barossa Valley wine next time we were in town. We could read the excitement in his words, and it was such a great story to tell around us as well.”

Tereshkovich said he plans to save up for a cruise to Australia and take an excursion to Alice Springs to meet the couple in the next two or three years.

“I don’t know what my approach will be, but I’ll keep it light,” he said. “We may sit down to a little Aussie beer, and I can find out who they are and tell them who I am. We can have some camaraderie there.”