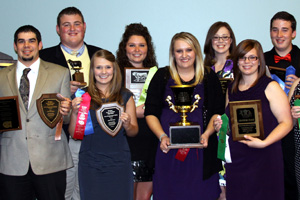 Continuing their winning streak, the team placed first in beef judging and overall beef and second in beef grading and reasons. Click to enlarge.

The Texas Tech Meat Judging Team continued its winning streak with a first-place finish at the American Royal Meat Judging Contest on Oct. 16 in Omaha, Neb.

The Red Raiders placed first in beef judging and overall beef. They finished second in beef grading and reasons – by only two points.

“The team won this contest with its consistency,” said Mark Miller, Horn Professor and San Antonio Livestock Show Distinguished Chair in Meat Science. “I am proud of the focus the team members are displaying at each contest.”

In addition to McMath, Williams and Cashman, team members include:

The team is coached by Miller and Shanna Ward, a meat science graduate student.

The team will compete at two more contests – one in Plainview on Oct. 30 and the International contest in Dakota City, Neb., on Nov. 13.