Anne Lynch Hansen didn't allow obstacles to keep her from being the first female Masked Rider. 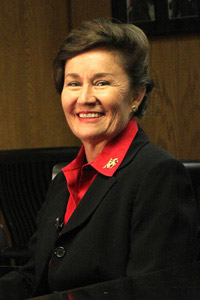 When Anne Lynch Hansen enrolled at Texas Tech as an animal science major in the early 1970s, she had no idea she would become a trailblazer – on a black horse.

“Since I got here and went to the first game, and that black horse took off like a cannon, I knew I wanted to do that!” said Hansen, the first woman to don the mask and cape and take the reins as the Masked Rider.

But earning the honor of wearing the outfit and riding Happy V was not an easy path. Candidates had to be an upperclassman agricultural sciences major and have good grades, so it wasn’t until she was a junior that she could even apply.

“I went in and wanted to put my name down on the list, and I was told I couldn’t do that because girls couldn’t try out,” Hansen said, laughing. “And that didn’t work for me. I probably wouldn’t have minded hearing ‘Well, you can’t win.’ But ‘You can’t try?’ That wasn’t working for me.”

Hansen grew up near Dell City on an irrigated farm and cattle ranch in West Texas, in the Northern Chihuahuan Desert.

“We had Brangus cattle, and so from very young I was riding. I grew up moving cattle and always had a horse,” Hansen said. “I showed calves in 4-H and was active in FFA and did a lot of showing at livestock shows – Houston, El Paso, county shows. I didn’t get first place a lot, but I sure loved showing and getting them ready.”

While biding her time waiting for her opportunity to try out for the Masked Rider, Hansen participated in Block and Bridle, and Rodeo Club. She also helped recruit the athletes from high school who came to campus to look at Texas Tech. But mostly she was involved with working at the Texas Tech farm, which was where the medical school sits now.

“I was working at the horse barn, so I was out there with Happy V all the time, and started riding him,” Hansen said. “I was there when Gerald (Nobles), who was the current Masked Rider, came and saddled him up and loaded the horse – and I was still dreaming about it. I really wanted to ride the horse and represent the school as the mascot. It was an important dream.”

By the end of her junior year, she was more than ready to take on the role of Texas Tech’s most beloved mascot, but she had some convincing to do. There was a group that included head football coach Jim Carlin; and Dale Zinn, chairman of the Department of Animal Science, among others on the committee. Hansen had to show them she could ride.

“At that time there were some who didn’t think a woman’s hands could hold the reins – that only a man’s hands could hold the reins,” Hansen said. “There was some controversy, but I didn’t hear very many girls against it! There were some people who didn’t like that idea very much. But even the Saddle Tramps, remarkable gentlemen then and now, gave a warm welcome the first game. And ever since the school selected me to ride, the tryouts for the Masked Rider have been open to all students – so anyone can try out and win, and represent the school as the Masked Rider. So I’m just happy I got to do it and it was a great experience riding for a great school.”

Hansen said in those days she and Happy V circled the whole field at full gallop each time the Red Raiders scored.

“We ran a lot! Happy V found his way through bands, cameras and balloons around the field, posed gently with children aboard, and really sparkled at rodeos and parades. He was a beautiful horse with a big heart and represented the university well,” she said. 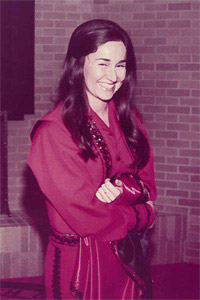 Hansen clutches her cape after accepting the reins to Happy V as the new Masked Rider.

“Throughout the years, our program has seen so many phenomenal women take the reins. They have not only been very talented and accomplished riders, but also great role models and representatives of the university,” Moncibaiz said. “Anne taking that leap to become the first female rider in the program’s 20-year history at that point made it possible for all women to pursue this opportunity. I will always admire Anne’s bravery and the positive impact she made on our program.”

In 1975, the year Hansen graduated, the Red Raiders went to the Peach Bowl. She took Happy V to Atlanta, where he was a big hit. “We never stop being an ambassador for the university and its fine education,” Hansen said.

“I feel now, looking back on the time, this is just one of many things I can think of that are firsts for Tech,” Hansen said. “I feel like the school’s always been ahead of its time and number one in a lot of ways. Great professors, great friends I made here. Just terrific experiences all the way around. And it’s an honor – it really is – to have represented the school – the school I love.”

The Masked Riders and their hometowns from the 1970s: