Bruce Bills has worked with the Spirit Program for the past eight years. 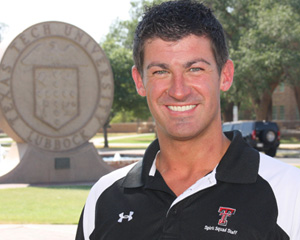 Bills served as an assistant coach for the Texas Tech Cheer Squad for the past five years.

The Texas Tech Center for Campus Life has named Bruce Bills as the coach of the cheerleading squad effective immediately.

Bills has worked with the Spirit Program at Texas Tech for the past eight years. He has overseen fundraising procedures, appearance scheduling, tryout logistics and general administrative duties. He most recently has served as the coach of the pom squad. Bills also assisted in coaching the nationally ranked Texas Tech Cheer Squad for the past five years. In addition, he serves as the website and social media manager.

Stephanie Rhode, spirit program supervisor, has worked extensively with Bills and is excited to have him as the new coach.

"Bruce's discipline, work ethic and love for Texas Tech will serve the university well in this role," Rhode said.

Bills has worked on the National Cheerleaders Association (NCA) staff for seven years and serves as a head instructor. He also judges and coordinates local cheerleading tryouts and competitions.