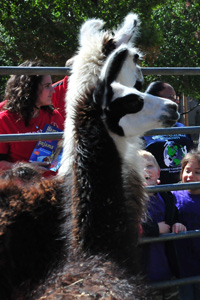 Anyone who happened to wander by the courtyard at Texas Tech’s College of Education during the lunch hour Thursday likely saw a strange sight – a llama – or rather, two – accompanied by red pajamas and a patchwork blanket.

Texas Tech’s Jumpstart Lubbock and the College of Education sponsored a local Read for the Record on the day of the national event.

Sponsored by Jumpstart, Read for the Record is a one-day yearly event which pledges to read a chosen book to millions of children across America. This year’s book is “Llama Llama Red Pajama” by Anna Dewdney.

Three pre-K classrooms from Ramirez Elementary were treated to a picnic lunch and a reading of the book, with two live llamas on hand, provided by Sam Jackson from the Department of Animal and Food Sciences. Carole Janisch, co-primary investigator for Jumpstart and a member of the Language and Literacy faculty, supplied red pajamas and a blanket like the ones featured in the book.

In the rhyming read-aloud, Baby Llama turns bedtime into an all-out llama drama. Tucked into bed by his mama, Baby Llama immediately starts worrying when she goes downstairs, and his soft whimpers turn to hollers when she doesn’t come right back. But just in time, Mama returns to set things right.

Jumpstart is a national early education organization that helps children develop the language and literacy skills they need to be successful in school, setting them on a path to close the achievement gap before it is too late.

Since 1993, Jumpstart has trained nearly 25,000 college students and community volunteers to deliver its program to more than 100,000 preschool children nationwide. 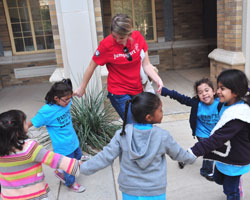 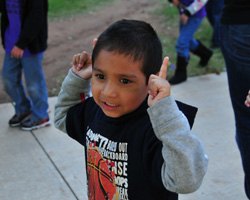