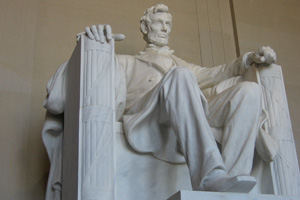 Abraham Lincoln, considered by some as one of the most influential presidents in U.S. history, was 6-foot-4.

When it comes to voter preference, the issues count. But some may pull the handle for a more primal reason: Physical fitness and stature against an opponent.

Their results will publish Oct. 18 in the peer-reviewed journal, Social Science Quarterly.

The paper, published by Gregg R. Murray, an assistant professor of political science, and graduate student J. David Schmitz, focuses on evolutionary psychology. This field studies universal human behaviors that are related to psychological mechanisms that evolved to solve problems faced by humans in ancient history.

Evolution and the Modern Life

“Some traits and instincts that may have been acquired through evolution continue to manifest themselves in modern life, seemingly irrationally,” Murray said. “A near-universal fear of snakes and a preference for unhealthy fatty foods likely evolved from when snakes were a common threat and caloric intake was uncertain. We believe similar traits exist in politics.” 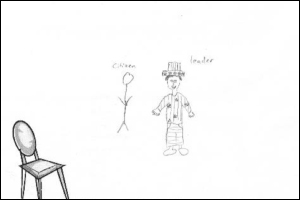 Here's one of the sketches the researchers received, depicting a leader compared to an average citizen.

The authors’ interest in the physical strength of political leaders stems from the popular observation that taller candidates have won 58 percent of U.S. presidential elections between 1789 and 2008; a trend known as the “presidential height index” by political pundits.

In order to test this theory, Murray and Schmitz first reviewed the literature to establish concepts of the “big man” in tribal leadership of ancient societies, as well as the impact of physical strength on rank and status in the animal kingdom.

The authors then carried out two studies, analyzing 467 U.S. and international students from both public and private universities in the United States.

The first study aimed to capture attitudes towards the preferred physical stature of leaders by using a figure-drawing task.

Students were asked to describe and draw a figure which represented their concept of a “typical citizen” and an “ideal national leader” before being asked to draw both figures together.

The results showed that 64 percent of students drew the leader as taller than the citizen.

In the second test, subjects were asked to answer a questionnaire about their own leadership attributes to consider how height influences personal perceptions of political leadership and attitudes toward running for office.

The expectation was that subjects with greater physical stature would be more likely to think of themselves as capable leaders. The results revealed a statistically significant association between height and perceived leadership capability and interest in running for a political office.

“We believe this research extends beyond merely establishing an association between physical stature and leadership by offering a theoretical basis for this phenomenon,” Schmitz said. “Culture and environment alone cannot explain how a preference for taller leaders is a near-universal trait we see in different cultures today, as well as in societies ranging from ancient Mayans, to pre-classical Greeks and even animals.”

The research and literature demonstrate that there is a preference for physically formidable leaders that likely reflects an evolved psychological trait, independent of any cultural conditioning, Murray said.