William K. Suter will talk at noon Friday (Sept. 23) in the Lanier Auditorium. 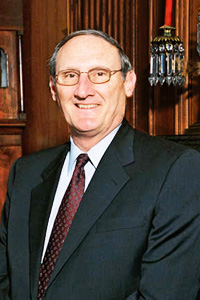 Suter, the 19th clerk of the Supreme Court, has held the position since 1991.

The Honorable William K. Suter, clerk of the Supreme Court of the United States, will speak at the Texas Tech School of Law at noon Friday (Sept. 23), in the law school’s Lanier Auditorium.  The event is part of the Walter B. Huffman Distinguished Lecture Series.

Suter’s speech, “Supreme Court Report,” has been approved by the Texas State Bar for .75 hours of continuing legal education (CLE) credit.  The Lubbock community is encouraged and invited to attend.  There is no cost for the event, for which the R21 parking lot north of the law school will be open to visitors beginning at 11:30 a.m.

Suter earned his bachelor’s degree at Trinity University in San Antonio and obtained his doctor of jurisprudence from Tulane University School of Law in New Orleans. He was admitted to the bar in 1962. A retired major general, Suter has served in the Army in numerous roles, including teaching new judge advocates at the Judge Advocate General’s School in Charlottesville, Va. He served as Acting Judge Advocate General of the Army, Chief Judge of the U.S. Army Court of Military Review, Commander of the U.S. Army Legal Services Agency, and Commandant of the Judge Advocate General’s School. He received the Bronze Star for his service in Vietnam and was also awarded the Distinguished Service Medal.