For the third-straight year, the university is honored for embracing veterans as students. 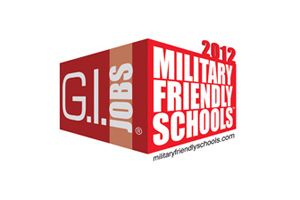 Of the more than 8,000 schools polled, Texas Tech was one of only 1,518 designated as a Military Friendly School.

Texas Tech was recently named to the 2012 list of Military Friendly Schools by G.I. Jobs Magazine. The list honors the top 20 percent of colleges, universities and trade schools nationwide that are doing the most to embrace America’s veterans as students.

This is the third consecutive year the university has received this designation.

“We appreciate our military students and the sacrifices they’ve made,” said Texas Tech President Guy Bailey. “Texas Tech has a great program in place to assist those students during the enrollment and financial aid processes and when they get on campus. We are proud to call them fellow Red Raiders.”

Texas Tech hosts a veteran specific website, a VA office and the Military and Veterans Programs (MVP) unit within the Division of Diversity, Equity and Community Engagement.

“I am excited that Texas Tech University has been designated as a Military Friendly School,” said Ryan Van Dusen, assistant director of the Military and Veterans Programs. “We have earned that designation every year that the list has been in existence.  This is truly a reflection of the commitment of our university to be the university of choice for veterans and their families.”

The Military Friendly Schools list was compiled through research starting in April during which G.I. Jobs polled more than 8,000 schools nationwide. Criteria were developed with the assistance of an Academic Advisory Board and included a school’s efforts to recruit and retain military and veteran students, results in recruiting military and veteran students, and academic accreditations.

Of the schools polled, only 1,518 were designated Military Friendly Schools.