'It was like a movie,' says the vice chancellor about his experiences at the White House that day. 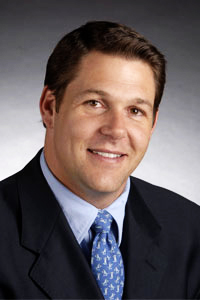 Arrington was serving as special assistant and associate director of personnel for President George W. Bush during the attacks.

Three members of the Texas Tech staff were working in Washington, D.C., at the time and were greatly affected by the terrorist attacks. Ten years later, their memories are still as vivid as the day the attacks occurred.

Over the next three days, Texas Tech Today will share their memories from that tragic day, beginning with Jodey Arrington, vice chancellor for research, commercialization and federal relations.

In 2001, Arrington served as special assistant and associate director of personnel for President George W. Bush and was at the White House the day of the attacks. He was forced to evacuate when it was perceived the White House was also a target.

“The whole thing was surreal. It was like a movie. There was a sea of people out in the streets around the White House and you could see smoke rising from the Pentagon, which was eerie. In a time like that you think that the White House is probably the safest place you can be, but that wasn’t the case. We had to evacuate like everybody else. It felt like we were under attack, and you were just watching for the next explosion.”

United Airlines Flight 93, the plane initially perceived to be headed toward the White House that day, ended up crashing in a field near Shanksville, Penn., when passengers tried to overthrow the hijackers. There were no survivors. President Bush later invited the families of the passengers to the White House to mourn with them and thank them for the heroism demonstrated by their fallen loved ones.

“After the families left the Oval Office, they walked down the corridor connecting the East and West wings. The entire White House staff lined the corridor to greet them and we all applauded them and just told them, ‘Thank you.’ They were emotional and we were emotional. It was a bittersweet experience and a moment that I will never forget.”

Arrington also said he would never forget the day of the attacks.

“It’s something that will forever be ingrained in my mind — the images of the planes crashing into the towers, smoke from the Pentagon, the fear and uncertainty in people’s eyes, the military personnel on every street corner, and the profound sadness of what had happened. It was a defining moment for our country.”