Political science professor and former U.S. Attorney General Alberto Gonzales says we live in a different America because of the attacks. 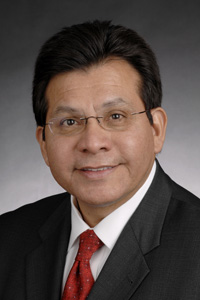 Serving as White House Counsel to President George H. Bush, Gonzales was en route to give a speech in Norfolk, Va., when the first tower was hit.

Three members of the Texas Tech University staff were working in Washington, D.C., at the time and were greatly affected by the terrorist attacks. Ten years later, their memories are still as vivid as the day the attacks occurred.

The day of the attacks, Gonzales, who was serving as White House Counsel to President George H. Bush, traveled to Norfolk, Va., to give a speech. When he arrived at the hotel he received a call from the White House informing him of the first tower being hit.

“At that time we didn’t really know what was happening, so I went ahead and gave my speech. By the time I finished, the second tower had been hit and we knew we were under attack.”

Gonzales quickly headed back to the airport to return to the White House, but by that time, the Federal Aviation Administration had grounded all air traffic. He was eventually flown to Andrews Air Force Base on a navy helicopter from Norfolk Naval Station.

“I always remember how eerily quiet it was at the airport, because everybody was at a standstill watching what was transpiring on TV. And nobody said a word. I can remember running to the terminal and hearing my footsteps. When I arrived at Andrews Air Force Base at 2 p.m., a White House van was waiting for me. As we drove to the White House, we passed by the Capitol and the streets were just deserted. All we saw were agents dressed in black with machine guns.”

When Gonzales made it back to the White House, he was escorted to the bunker, joining Vice President Dick Cheney and other officials. There they conducted a secure video conference with the president. Gonzales also spent part of the afternoon in the Situation Room and his office in the West Wing.

“At around 7:30 p.m., Karen Hughes, the communication director, and I went to the South Lawn and stood outside the Oval Office and watched Marine One land. The President got out and came toward us. We greeted him and he didn’t say anything. He just walked right by us into the Oval Office.”

President Bush eventually went to his private dining room, where he talked with Gonzales and several other White House officials about what had transpired that day and about what he was going to say in his address to the nation that night.

“In some ways it feels like it was yesterday, and in other ways it seems like it was a lifetime ago. The lives of many people were affected. We live in a different America because of what transpired that day.”