The mix of students has changed significantly since the law school first opened more than 40 years ago. 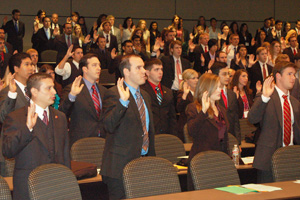 As a class, the students speak 17 different languages, have lived in 24 different countries and ten of the students have already acquired a master's degree.

This fall the Texas Tech School of Law welcomed the Class of 2014, the most diverse class in the law school’s history.

In 1967, the first entering class at the law school had only five women, no ethnic minorities, and most of the 72 students were from West Texas or received their undergraduate degrees from Texas Tech.

Stephen M. Perez, the new assistant dean for admissions and recruitment at the law school, credits the Texas Tech Law community with this achievement.

“All students – women, minorities, non-traditional, or otherwise – want to get the best legal education they can and want to attend a school that cares about them,” Perez said. “Everyone here, from the students to the staff and faculty to our alumni, contributes to making applicants feel welcomed and cared for. It’s the thing that new students cite most often as the reason they chose Tech Law over other law schools.”

Forty years later, the latest entering class has grown and changed significantly, much like the state itself. Women make up nearly half (49 percent) of the Class of 2014, marking only the seventh time an entering class has been more than 45 percent female.  Minority students comprise 33 percent of the incoming class, six percentage points higher than the previous all-time high set in 2008. And while the law school continues to enroll a large number of students from Texas Tech, they are joined by students from 79 other colleges and universities from across the country.

Even those numbers don’t tell the whole story, though. Twenty percent are the first in their families to graduate from college.  As a class, they speak 17 different languages – from Arabic to Vietnamese – and have lived in 24 different countries for more than a month, including Cameroon, Argentina and the Kyrgyz Republic. Ten students come to the law school already having earned a master’s degree in another subject.

Darby Dickerson, the new dean of the law school, and the school’s first female dean, emphasized the value of the Texas Tech law experience: “Tech Law’s reputation as both a Best Value law school, and a law school that values practical legal training, has garnered us national attention as a school that provides students with an outstanding education, for an outstanding value. And the diversity in this entering class reflects that students appreciate our strengths."