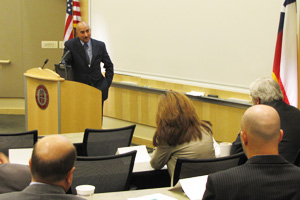 Kousay Abdulsattar Majboor, director general of Iraq’s Ministry of Electricity, discusses the challenges of getting power to people in his country during a presentation to Texas Tech faculty.

For the second year in a row, researchers at Texas Tech hosted a delegation of six Iraqi government officials intent on learning how to fund scientific and technological research and develop science policy in their country as they begin rebuilding its academic infrastructure.

The visit to Texas Tech was intended to assist the Iraqi government with redevelopment of higher education and reconstruction of science, technology and engineering capacities, said Carl Phillips, a biology professor with Texas Tech’s Center for Environmental Radiation Studies.

“Last year, the delegation was focused on basic issues on how to put together science advisement for the prime minister and how we in the U.S. handle science and technology funding,” he said. “When they returned from their visit from Texas Tech, they recommended to the prime minister that a science advisor position be created, and that’s happened.

“The group that was here is a group of people that has responsibility for implementation of the rebuilding strategy for science and technology. Implementation is going to be the hard part for Iraqis, because this government is a new invention. The generation responsible for starting the government has no experience with democracy. They’re used to a dictatorship. So it’s a huge challenge to make anything happen, much less implement a plan for improving science and engineering in an entire country.”

During their time in the U.S., the delegation members also will meet with researchers at Massachusetts Institute of Technology, Sandia and Los Alamos National Laboratories, the National Science Foundation (NSF), the U.S. Department of State and members of the Office of Science and Technology Policy at the White House.

Texas Tech as a Research Example

Abdulmajeed H. Hasan is the head of the International Relations Department at Iraq’s Ministry of Science and Technology. He said meeting with research organizations such as Texas Tech helps the Iraqis see how they can build their own science and technology sectors.

“It is a useful chance for us to meet with colleagues in United States of America to discuss certain issues, especially cooperation between Iraq and the U.S. in the fields of science and technology,” Hasan said. “We got a chance to see very advanced centers and institutes, such as this university and Sandia Laboratory and Los Alamos National Laboratories, which was very useful. As you know, we have reconstruction of Iraq and infrastructure. We do have many purposes for science and technology. We still have more to do, and we have many tasks that must be achieved in the near future. Without mutual cooperation, these targets cannot be achieved.”

The State Department’s Bureau of Education and Cultural Affairs selected Texas Tech to serve as host to a delegation of Iraqi government because of the university’s lengthy involvement with scientific and educational programs in Iraq.

Phillips said the meeting is in compliance with the Strategic Framework Agreement, which partly involves helping Iraq redevelop science, engineering and technology. Texas Tech researchers became involved on one of their trips to help train Iraqis to safely dismantle former nuclear facilities and map possible contamination. 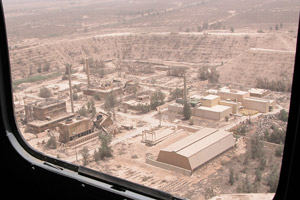 “When we were in Baghdad two years ago, we were drawn into this teleconference asking how the U.S. could shepherd scientific and technological growth in Iraq,” Phillips said. “This is really separate from our other projects in Iraq, but it’s also very important for our work, too. We’ve tried to put together a program that shows how a major U.S. research university supports its research and show the infrastructure and the role faculty members play with different funding agencies like the NSF.”

Ron Chesser, also a biology professor with Texas Tech’s Center for Environmental Radiation Studies, said he and other Texas Tech researchers helped the delegation see how researchers at academic institutions in this country find funding to do their research. During the war in Iraq, Iraq lost many of its scientists, who were killed by insurgents or fled the country, Chesser said.

Doing the radiation work in Iraq has been difficult because of the lack of training and availability of scientists, he said.

“Iraq has been out of the scientific development business since 1991,” Chesser said. “That’s a long time. That’s an entire generation of scientists that has been lost. So they’re starting over at a rudimentary stage. They need some expertise and assistance and redirection in new lab facilities and new educational facilities to stimulate rapid development of scientific research and development in Iraq.”

While the delegation was here, Texas Tech researchers also discussed science, technology, engineering and mathematics (STEM) programs that encourage children to pursue careers in those fields.

The National Science Foundation (NSF) is an independent federal agency created by Congress in 1950 "to promote the progress of science; to advance the national health, prosperity, and welfare; to secure the national defense"

With an annual budget of about $6.9 billion (FY 2010), they are the funding source for approximately 20 percent of all federally supported basic research conducted by America's colleges and universities. In many fields such as mathematics, computer science and the social sciences, NSF is the major source of federal backing.

View a 2 minute video overview of NSF's mission and focus.